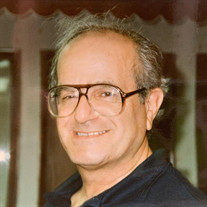 Vito Lettieri was born on September 9, 1935. He passed away peacefully surrounded by his wife Licia and family on December 24, 2021. Vito was born in Queens, New York to Ottavio and Antonia Lettieri from Rofrano, Italy. Ottavio was sponsored by his Uncle to work in New York for 10 months at a time, in which he would send money back home. During his second work visa WWI broke out. He had the choice to return to Italy or fight in the US. He chose the latter and that is how they became US Naturalized citizens. Antonia later joined him in the US with her 3 young children, Teresa, Frank & Angelo. While living in the US Ottavio & Antonia would have 4 more sons. During the Cold War, Vito served in Germany. It was very cold and bitter there. There are many pictures of him bundled up and on tanks. During this time, he was able to visit Rofrano and get to know his family. Vito attended and graduated from School for Aviation Mechanics in New York City. He went on to work for Boeing as an Inspector for Airplanes. He then worked as a school bus driver in NYC. After retiring and moving to Fort Mill, SC he also worked as a bus driver in SC for a few years until fully retiring. Antonia passed away and this was difficult for Vito. He lived with his father, and then with his Brother Angelo and sister in law Angie and niece Mary Ann. They became like second parents to him and Mary Ann like a sister. It was during a trip to Israel in 1983 that he met the love of his life, Licia Milazzo. They had dated as teenagers, but went their separate ways. Over the years they began to develop their friendship and when they traveled to Israel their love for each other became more evident. They married on February 1, 1985. He loved to visit family and go on vacations. He was very caring and loved to help others. Vito is survived by his loving wife Licia, her children, Anthony & Eileen, Steven & Lisa, Lee & Paul, 9 grandchildren Andrew, Joshua, Rachel, Ino, Janine, Julia, Jenna, Nicole & Michael and 4 great grand children, Whom he loved as his own. And more than 100 nieces and Nephews. Visitation will be held from 4:00 - 8:00 PM on Tuesday, December 28, 2021 at Osceola Memory Gardens Funeral Home, 2000 13th Street, St. Cloud, Florida. Funeral services with military honors for Vito will be held at 9:30 AM on Wednesday, December 29th at the Cape Canaveral National Cemetery in Mims, Florida. Arrangements entrusted to Osceola Memory Gardens Funeral Home, St. Cloud, FL. www.OsceolaMemGds.com.

Vito Lettieri was born on September 9, 1935. He passed away peacefully surrounded by his wife Licia and family on December 24, 2021. Vito was born in Queens, New York to Ottavio and Antonia Lettieri from Rofrano, Italy. Ottavio was sponsored... View Obituary & Service Information

The family of Vito Antonio Lettieri created this Life Tributes page to make it easy to share your memories.

Vito Lettieri was born on September 9, 1935. He passed away peacefully...

Send flowers to the Lettieri family.