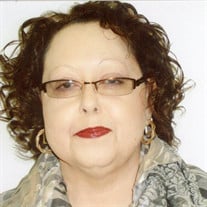 Terry YoVonda Parham, 64, formerly of New Jersey, died December 25, 2021, in Solaris Nursing Home, St. Cloud, FL after a lengthy battle with Multiple Sclerosis (M.S.) At her request, Terry’s body has been donated to the University of Florida College of Medicine. Terry Parham or as she’s known by her family as Vonda, was born May 1, 1957 in Philadelphia, PA to Lloyd and Edwina Smith. After graduating Kennedy High School in Willingboro, N J. in 1974, she had an extensive career with the Supreme Court of New Jersey as a bookkeeper. Vonda found Christ at an early age. She was a part of numerous gospel choirs until finding her home at St. Matthews Baptist Church, Williamstown, New Jersey around 1997. She fellowshipped there until moving to Florida with her sister because of limitations with her illness. In 1988, Vonda met Glenn Parham at Richard J. Hughes Justice Complex. Vonda and Glenn were married on August 4, 1990 and stayed married for 23 years. They divorced May 2013. In June of 2010, she retired and spent most of her days cooking, playing cards, traveling, attending tea parties and cheering fort the Steelers. Vonda was predeceased by her mother, Edwina, father, Lloyd, and brother, Edwin. She is survived by her sister and brother-in-Law, Karen and Michael Moor, 2 aunts, several nieces, nephews and cousins. She will also be dearly missed by her former husband Glenn, her Goddaughter, Kristin Rodriguez, Godson, Anthony Wingo, and numerous friends. A memorial service will be held January 8, 2022. Service starts at 1:00 pm at Sweeney Funeral Home, 337 Bridgeboro Street, Riverside, NJ 08075. Thank you for all your prayers and condolences during this hard time.

Terry YoVonda Parham, 64, formerly of New Jersey, died December 25, 2021, in Solaris Nursing Home, St. Cloud, FL after a lengthy battle with Multiple Sclerosis (M.S.) At her request, Terry&#8217;s body has been donated to the University of... View Obituary & Service Information

The family of Terry YoVonda Parham created this Life Tributes page to make it easy to share your memories.

Send flowers to the Parham family.