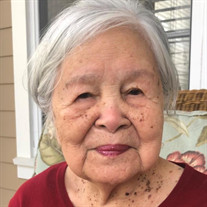 Soledad Trinidad passed away peacefully at home on the morning of October 30, 2021 at the age of 93. Soledad was born in Calamba, Laguna (Philippines), daughter of the late Igmidio and Maria Santos. She earned a Bachelor’s degree in Education from the University of Santo Tomas and worked as a librarian at the Philippine Normal College in Metro Manila. She later taught in the Childhood Development program at Camp Crame (formerly the national headquarters of the Philippine Constabulary) where she met her late husband. Together they raised a young family of four and moved to the United States in 1969, establishing roots in New York City. Soledad worked for 23 years at Fireman’s Fund Insurance Company in Wall Street and later at American General Insurance before her retirement in 1992. Soledad loved to travel around the world with her husband and looked forward to cruises and trips to faraway places. She possessed an amazing talent for tending plants and gardening, often collecting seeds and replanting them year after year. Soledad will be remembered as a kind and gracious woman who had “the patience of a saint.” Her character was exemplified by a calm temperament and quiet inner strength. She never complained nor sought attention, yet she was always very attentive and giving to others. Above all, she was a selfless wife and mother who sacrificed her needs while working tirelessly all her life. She was a beloved wife, mother and grandmother, and was most proud of her children and their families. Soledad will be dearly missed by everyone who knew and loved her. She was preceded in death by her husband of 47 years, Iluminado Trinidad. She is survived by her four children: George Trinidad (Gina), Eric Trinidad (Jovita), Dr. Susan Ross, and Ruth Coughlan (Sean); thirteen grandchildren: Jennifer Cruz (Edgar), Caroline Gasbarrini (Peter), Kathleen Falls (Michael), Connie Trinidad, Andrew Trinidad, Jonathan Trinidad, Kimberly Head (Andrew), Erin Trinidad, Alexandra and David Ross, Caitlin, Brian and Sarah Coughlan; nine great-grandchildren: Devon and Gianna Gasbarrini, Emily Trinidad, Michaela, Phelim, Pearce and Ailish Falls, Lily and Thomas Head; siblings Elvira Baello and Dr. Alejandro Santos, as well as numerous nieces and nephews. The family wishes to thank the staff at AdventHealth Hospice for their help and loving care in Soledad’s last year as she suffered the long period of mental and physical decline caused by dementia. This, she endured with great courage and grace until God called her Home. A memorial mass to honor Soledad’s life will be held on Thursday, November 11, 2021 at 11:00am, Corpus Christi Catholic Church, 1050 Celebration Ave., Celebration, FL. Attendees are asked to please be mindful of others and wear masks indoors. A video of the service is available to be viewed via CorpusChristi.Church (click on the Livestream button and select the mass.) A reception will follow directly after church services. A private burial is scheduled for Wednesday, November 17, 2021 at 11:00am at Holy Cross Cemetery, 5061 Harding Highway, Mays Landing, New Jersey where Soledad will be laid to rest by her husband’s side. In lieu of flowers, donations may be sent in memory of Soledad Trinidad to the Alzheimer's Association, 225 N. Michigan Ave., Chicago, IL 60601 OR to AdventHealth Foundation Central Florida (Hospice Care), 550 East Rollins Street, Sixth floor, Orlando, FL 32803. Condolences and memories can be expressed on Soledad’s Tribute Wall.

Soledad Trinidad passed away peacefully at home on the morning of October 30, 2021 at the age of 93. Soledad was born in Calamba, Laguna (Philippines), daughter of the late Igmidio and Maria Santos. She earned a Bachelor&#8217;s degree in Education... View Obituary & Service Information

The family of Soledad Trinidad created this Life Tributes page to make it easy to share your memories.

Soledad Trinidad passed away peacefully at home on the morning...