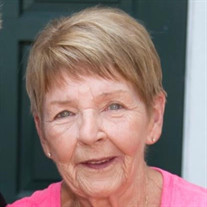 Sarah “Sally” Catherine Reidy, 78, of Kissimmee, Florida, passed away Sunday, March 7, 2021. She was originally from Brooklyn, New York and relocated to Kissimmee in 1989. She graduated Stella Maris High School in Queens, New York, in 1960. Sally is survived by husband Gene Reidy, her daughter and son-in-law Sally Ann and Eddie Healey, daughter Kathy Reidy, daughter and son-in-law Jean Ann and Frank DiPolo, son Eugene Reidy, grandchildren Christopher and Meagan DiPolo, Ryan and Madison Healey, and Kassidy Aldrich-Reidy, brother and sister-in-law Howie and Marie Horn, brother and sister-in-law Charlie and Maura Horn, and sister and brother-in-law Mary and Ed Reilly. She was preceded in death by her parents Howard and Marie Horn, and sister and brother-in-law Helen and Eugene Jakubowski. Sally and Gene were married for 58 years. They met when Sally was 14 and Gene was 15 — if you had asked them who chased who, their stories would differ. But one thing they could agree on is that they were soulmates. They built an amazing family in Brooklyn as Mom and Dad, which grew into a bigger family in Kissimmee, where they took on the titles RaRa and Pa-Paw. Sally had an effect on everyone she knew — she treated friends like family, and family was everything to her. Sally always made sure you knew you were loved; she mailed cards to her grandkids every holiday (even if she saw them that day), texted anyone going on a trip to wish them a safe flight, and gave out random gifts she thought you might like. Family history was very important to her, and she often spent time telling family stories and gathering old photos and mementos to share with everyone. Sally’s presence lit up a room, and she was always surrounded with laughter — and probably some dessert. She never met a chocolate chip cookie she didn’t like! In lieu of flowers a donation can be made to the American Heart Association or the American Cancer Society in Sally's memory.

The family of Sarah Catherine Reidy created this Life Tributes page to make it easy to share your memories.

Send flowers to the Reidy family.