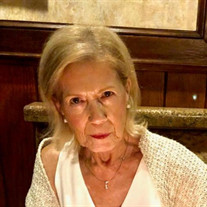 Patricia Ann “Trish” Galone (nee Weber) died peacefully at home in Poinciana, FL, Wednesday, May 19, 2021. She was born on July 4, 1947 to John Francis Weber and Mary Margaret Keasey in Pittsburgh, Pennsylvania. She met her husband William Neil Galone in high school and they had been married for 53 years. She Graduated Summa Cum Laude from University of Central Florida with a degree in Legal Studies, and was a proud UCF Golden Knight. During her career, she worked for law firms in Orlando, Vero Beach and Ft Pierce, FL, and Yakima WA, and for Child Welfare in The Dalles, OR. She was a member of St Paul’s Episcopal Church in Winter Haven, FL and St Brendan’s Episcopal Church in Pittsburgh. Trish enjoyed genealogy research, travel, and playing golf with her fiends. She was a member of the Joshua Stevens Chapter of the National Society Daughters of the American Revolution (NSDAR), St Cloud, FL and is a descendant of the Revolutionary soldier Mathias Cypher. She is survived by her husband William Neil Galone; sons, Jeffrey (Martha) Galone of Deland and Michael (Amelia Koehler) Galone of Pittsburgh; 4 grandchildren, Austin Galone, Zoe and Jack Galone, and Christian Lowe; sisters Cynthia (the late James) Cillo of Pittsburgh and Maxine Weber (Stephen Levy) of Philadelphia; sister-in-law Nancy (the late Dan) Fay of Virginia, and several nieces, nephews and cousins. She was preceded in death by her parents. Friends will be received at the Osceola Memory Gardens Funeral Home in Poinciana, FL on Saturday June 5 from 4:00 PM to 7:00 PM. Friends will also be received at H.P. Brandt Home, 1032 Perry Highway in Pittsburgh (Ross) on Friday June 18 from 2-4 PM and 6-8 PM, followed by a service at St Brendan’s Episcopal Church in Sewickley (Franklin Park) on Saturday June 19 at 11:00 AM. Internment will be at Allegheny County Memorial Park in Pittsburgh at a later date. In lieu of flowers, please make contributions in Trish’s name to Moffitt Cancer Center in Tampa.

The family of Patricia Ann “Trish” Galone created this Life Tributes page to make it easy to share your memories.

Send flowers to the Galone family.