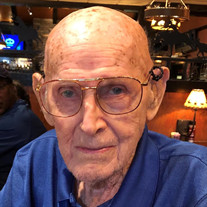 ﻿Harold L (Pete) Phillips, 97, of St Cloud, FL was called home to be with his Lord on September 4, 2021. Pete was born in Littleton, WV on July 5, 1924. Later his family moved to New Martinsville, WV and he attended Magnolia High School. Pete was patriotic with a deep love of America. He enlisted in the Marines during WWII and served most of his time in the South Pacific. After the war and restless in civilian life, he enlisted in the Air Force. He once again served his country and was stationed in places from OH, FL, NM, Okinawa and CA. He was part of the Mercury-Apollo Space Program as a Cone Chaser. He spent much time at down range tracking stations which included South Africa. A month at a time was spent on the “Rock”, the volcanic Ascension Island tracking capsules upon reentry. He was part of the elite group who played a vital role in the Birth of the Space Age. He retired from the US Air Force in 1966 with twenty years of service. Pete returned to his roots in West Virginia where he had a twenty year career at PPG Industries. After retirement, Pete and Ruth became snowbirds splitting time between WV and FL. They loved to travel and crossed the country to visit many friends and family. They even drove all the way to Alaska to visit their daughter Debbie, then back across Canada and back to Florida. In addition to traveling, Pete loved the sun and spent many a relaxing hour soaking up those beautiful Florida rays. Pete was preceded in death by his wife of seventy years, Ruth G Phillips, in October, 2019. He leaves behind three daughters, Patricia Robinson (Johnny) of Iuka, MS, Debra Davis (Sam) of Daleville, AL and Sharon Jones (Rick) of Charleston, WV, three grandchildren , Tina Davis Boren of Daleville, AL, Bryan Robinson (Cassie) of Iuka, MS, and Gregory Jones of St Petersburg, FL and three great grandchildren Warren Simpson, Austin Boren and Dylan Robinson and four great great grandchildren, Kolt, Callie, Raegan, and Zane. He loved his church, Neptune Road Baptist in Kissimmee, FL where he was a Deacon. Pete had read his bible front to back many times. He was a devoted husband, who loved his wife dearly and was the best of fathers, setting a wonderful example for his daughters. Pete will be laid to rest beside the love of his life, Ruth G Phillips, on September 13, 2021. Visitation will be at Osceola Memory Gardens, 2000 13th Street, St Cloud, FL from 10am-noon with service immediately following. Graveside service will follow at Mount Peace Cemetery in St Cloud, FL.

&#65279;Harold L (Pete) Phillips, 97, of St Cloud, FL was called home to be with his Lord on September 4, 2021. Pete was born in Littleton, WV on July 5, 1924. Later his family moved to New Martinsville, WV and he attended Magnolia High School. Pete... View Obituary & Service Information

The family of Harold Lee "Pete" Phillips created this Life Tributes page to make it easy to share your memories.

Send flowers to the Phillips family.