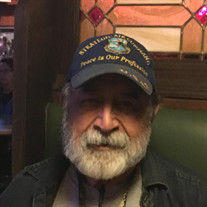 Francis W. “Frank” Fielder (Mahpiya To Wanbli Ayuksanyan or “Blue Sky Circling Eagle”), 75, began his journey to the Spirit World on September 2, 2021 at his home in Orlando, FL, after a lengthy illness. A memorial service will be held in South Dakota at a later date. Francis Wayne Fielder was born August 10, 1946, in Pine Ridge, SD, to Faye and Irma (Brown) Fielder. He was a proud member of the Cheyenne River Sioux Tribe. He grew up in Rapid City, SD, and attended General Beadle Elementary School and North Junior High before moving to Mission, SD, in 1961 to reside at Bishop Hare Mission Home (“Hare School”), and graduating from Todd County High School in 1965. He attended Black Hills State College in Spearfish, SD, but dropped out to enlist in the U.S. Air Force in 1967. He served as an Air Force medic for 20 years and was stationed at air bases in Orlando, FL; Okinawa, Japan; Udorn, Thailand; Selma, AL; Tokyo, Japan; Omaha, NE; and Homestead, FL. During his assignment at McCoy AFB in Orlando, he was one of the two first responders on the scene of the B-52 that crashed in Orlando on Good Friday (March 31) 1972, for which he earned a Meritorious Service medal. When he was stationed in Thailand, he cared for the wounded and dying soldiers in the Viet Nam war. While serving in the Air Force, Francis earned an A.A. in Medical Assisting from the Community College of the Air Force, and a B.A. in Communications from Barry University in Miami Shores, FL. Francis met his wife, Linda (Ryniewicz), during his first assignment in Orlando. After 20 years in the U.S.A.F., he retired as a Master Sergeant, and moved back to Orlando with his family to live. He then worked as a civil servant for 6 years for the U.S. Navy and 13 years for the U.S. Army. Francis loved playing baseball as a kid growing up in Rapid City, and later when he helped coach his sons’ baseball teams. Watching and cheering for the Florida State Seminoles football team was one of his greatest pastimes. He also enjoyed time spent on his computer with Facebook friends, and researching family history. He was proud to be the great-great grandson of Baptiste “Big Bat” Pourier. Francis will be lovingly remembered by his wife, Linda, and his children: Kelly, Kristopher (Mary), Jameson, and Kyle; several grandchildren and great grandchildren; sisters: Carla Fielder (Smoky) Claymore of Aberdeen, SD, Jo Lessert Barber and Lori Lessert (Rich) Poirer of Rapid City, SD; Yvette Fielder of Queen Creek, AZ; and brothers: Darrell Fielder, Studio City, CA, and Clint (Levi) Fielder, Lakewood, CA; and many cousins, nieces, and nephews, including David (Debbie) Brown of Schuyler, NE, as well as a special aunt, Charlotte Ruff of Rapid City, SD. Francis was preceded in death by his parents and two stepfathers, as well as his beloved grandparents: Carl and Jennie Brown, and Francis and Julia Fielder; and many aunts, uncles, cousins, and in-laws.

The family of Francis F. Fielder created this Life Tributes page to make it easy to share your memories.

Send flowers to the Fielder family.