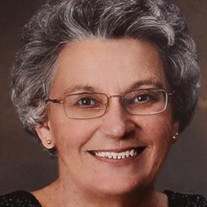 Doranne Smith Whitehead, 73, of St. Cloud, Florida, passed away at home with her family by her side after a battle with cancer. Doranne was born in Kinston, NC, on December 17, 1947, to the late Quincy and Rita Smith. She is survived by her husband, John Gordon Whitehead, Jr. of St. Cloud, FL, daughter, Carla Whitehead Moore (Robert Shorback), of Kissimmee, FL, and granddaughter, Abagail Ann Moore, of Poinciana, FL. She was one of the four Smith girls; Diana S. Tyndall (Raymond) of Newport, NC, Elaine S. Holloman (Ronald) of Washington, NC, and Leslie S. Jones of Trenton, NC. She was also adored by her many nieces, nephews, and cousins. In addition to her parents, she was preceded in death by her in-laws, Gordon and Addie “Bill” Whitehead of Morehead City, NC, brother-in-law, James W. Stallings of Kinston, NC, along with sister and brother-in-law, Phyllis and Dave Whereatt of Newport, NC. She was always a Girl Scout at heart with green and yellow being her favorite colors. Spring’s “first flower”, a jonquil, was her most favorite. Doranne graduated from Grainger High School in 1965. She met John while attending Lenoir Community College and the two married on March 17, 1973. She was an Army wife for 25 years and learned early on “to always walk on his left.” They called many places their home while raising their daughter, Carla, before settling in St. Cloud, FL in 1992. She enjoyed working at Walt Disney World in Orlando, FL, where she was employed for 11 years, and received the Partners in Excellence Award in 2001. She was also an Azan “First Lady,” when John was Potentate and met many wonderful friends through the organization. Known as “Granny Smith” to granddaughter, Aba, the two loved spending time on projects together; she even taught her how to crochet. Together they also enjoyed donuts and coffee when she took Aba to school. Doranne, John and Aba’s favorite breakfast spot was Frankie’s Diner in St. Cloud, where they visited often. Her strong ties to her hometown kept her very close to family in North Carolina. Hurricane season was another “Act of Nature” when she and her sisters kept in close contact as things began to evolve with each one and it came closer to land. As the pandemic unfolded, she developed an even closer connection with her sisters by phone comparing “notes” of their different situations and locations. When visiting her NC home, she loved spending time with her family and extended family. Her most favorite Morehead City cuisine was a shrimp burger from El’s Drive-In. When eating at Cox’s Family Restaurant, she always ordered fried flounder that had to be served “on the dark side.” She had a passion for sweet tea, especially with a Bojangles country ham biscuit with an extra slice of ham. A Visitation will be held on Thursday May 20, 2021 from 4:00 PM - 8:00 PM in St. Cloud, FL. A funeral service will be conducted at 6:00 PM. Interment will take place in Bayview Cemetery in Morehead City, NC. Arrangements are under the care of Osceola Memory Gardens Cemetery, Funeral Home and Crematory, 2000 13th Street, St. Cloud, FL 34769. 407.957.2511 www.osceolamemgds.com.

Doranne Smith Whitehead, 73, of St. Cloud, Florida, passed away at home with her family by her side after a battle with cancer. Doranne was born in Kinston, NC, on December 17, 1947, to the late Quincy and Rita Smith. She is survived by her... View Obituary & Service Information

The family of Doranne S. Whitehead created this Life Tributes page to make it easy to share your memories.

Send flowers to the Whitehead family.