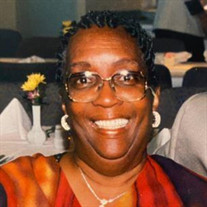 Blondell Stroude was called back home to be with the Lord on July 7, 2021 at the age of 86. Blondell lived life on her terms with faith, love and independence at the core. All who knew her described her as feisty and candid yet good-natured. She was a calming force in the midst of crisis; the type of person who was always there when needed without fanfare and without expectation of reciprocity. A resident of Good Samaritan Society in Kissimmee, Florida in her latter years, she spent her days surrounded by family and friends, blessing others with sage advice and generosity, studying scripture and enjoyed playing electronic games. Blondell was born on June 13, 1935 in Charleston, SC to Rosalie Jackson. At an early age, with her mother and older brother Richard, she migrated north to Harlem, NY where she spent most of her childhood and early adulthood. Her mother married Aaron Harper who adopted and helped raise Blondell from the time she was a young teen. Growing up, she enjoyed singing and dancing. In fact, she was asked to be in a singing group but was not allowed to due to the required travel. As she got a little older, Blondell could be found touching lives preaching on the streets of Harlem. She later moved to the Bronx, NY where she lived for over 50 years. Ms. Stroude was the proud mother of two, Steven and Karen. She always put her family first. She was fiercely independent, self-sufficient, and very protective. Blondell worked tirelessly, and often multiple jobs, to single-handedly take care of her children and make ends meet. For over 30 years, she worked for and retired from the NYC Department of Social Services. Trained as a stenographer, she transcribed the manuscript for the famous 1973 novel, Sybil. She also worked as a switchboard operator, barmaid and in retail during the holidays. Blondell had many talents. She was a self-taught seamstress and knitter who often made her own clothes as well as items for family and friends. She loved to cook and even learned how to make all of her kids favorite take-out foods. Blondell’s journey, wrought with challenges and obstacles, brought her back to God. The way she lived her life was a true example of faith. She led her life guided by the Holy Spirit and believed that God’s purpose for her life was to help others which she constantly demonstrated through her actions and mentality of abundance. She was a member of Love Gospel Assembly of God in the Bronx. Blondell Stroude is survived by her children, Steven and Karen, six grandchildren and 6 greatgrandchildren.

Blondell Stroude was called back home to be with the Lord on July 7, 2021 at the age of 86. Blondell lived life on her terms with faith, love and independence at the core. All who knew her described her as feisty and candid yet good-natured.... View Obituary & Service Information

The family of Blondell Stroude created this Life Tributes page to make it easy to share your memories.

Blondell Stroude was called back home to be with the Lord on...

Send flowers to the Stroude family.