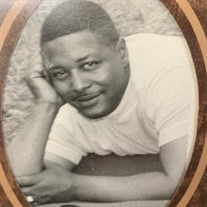 William Gilbert Wheeler was the second child of Elsie Marie Byrd and William J. Wheeler. He was born on April 7, 1932 in Glassboro, NJ and departed the place we call Earth 28 days before his 90th Birthday from Florida. He came from a family of 8 children. Five of them preceded him in death: Edward Cicel in 1935 at only 4 days old, Ethel Mae in 1997, Mattie V. (Biddy) in 2011 and Hortense Marie (Tiny) in 2012. In 1951, at the age of 19, William enlisted in the United States Army. He served 20 years and 23 days with two combat tours in Korea, two combat tours in Vietnam and two tours in Germany. He retired from military service in March 1972 with the rank of Staff Sargent E-6, having earned many meritorious awards. After his retirement from military service he worked many years as a long and short haul trucker. His trips took him all over the United States as far as California and North Dakota. He leaves to cherish his memory: his loving wife Hedwig, aka Hedy; his two children from a previous marriage, daughter Roni L. Wheeler and son William G. Wheeler, Jr.; his stepson Rolf Michael Nagel and his stepdaughter Silvia Nagel. Stepson Bertram Nagel preceded him in death; his grandchildren: Marcus L. Poole II (Paris Fuentes), Jonathan M. Nagel, Heidi E. Burger (Carlos M. Burger), as well as seven great grandchildren: Jasmin Sofia Pool, Marcus Antonio Pool, Ava Olivia Pool, Nathan A. Alston-Nagel, Alexandria N. Alston-Nagel, Nicholas X. Alston-Nagel and Sebastian A. Burger. He also leaves to cherish his memory: his brother Ronald Wheeler; his sister Iolett Juanita Wheeler-Wise (John Wise); his sister Muriel D. Pritchett and not to forget his many cousins, nieces and nephews, who loved their uncle/cousin Gilbert. He was a member of American Legion Post 10 in Kissimmee, FL since the year 2000 and before that he was a member of die American Legion Post 509 in West Hampton, NJ. He was also a founding member of the “Esquires Motorcycle and Van Club of Mt. Holly, NJ”, a club organized in the early 80’s by retired military members living in the area of Fort Dix and McGuire Airforce Base and was active until the end of 2005. He enjoyed riding his Honda Aspencade. It was a beauty. We had so much fun being part of this club for so many years.

William Gilbert Wheeler was the second child of Elsie Marie Byrd and William J. Wheeler. He was born on April 7, 1932 in Glassboro, NJ and departed the place we call Earth 28 days before his 90th Birthday from Florida. He came from a family... View Obituary & Service Information

The family of William Gilbert Wheeler Sr. created this Life Tributes page to make it easy to share your memories.

Send flowers to the Wheeler family.