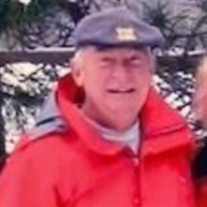 Warren Francis Bays, 86, of Aitkin passed away at Poinciana Medical Center in Kissimmee, Florida on January 12th. Warren was born on August 5th, 1935 in Windsor, Ontario, Canada. He worked for the Ford Motor Company, the Duriron Corporation as a Sales and Marketing executive, and had his own very successful process industry distribution company, Bays Equipment, with his wife Mary Anne for many years. Starting out in Toronto, Warren’s skill and expertise created company sales success in Detroit, Seattle, Denver, Brussels Belgium, Boulder, Salt Lake City and again in Denver. He and his family traveled extensively in the U.S., Canada and Europe for both business and pleasure and he made an abundance of valued friends and colleagues wherever he went. He and Mary Anne retired to Farm Island Lake in 1995 and greatly enjoyed spending time with family and friends there. He loved to golf at Cyuna Rolling Hills in Deerwood, as well as the Grenelefe Country Club in Haines City, Florida. He is survived by son Morgan (Brenda), daughter Lisa, grandson Zachary Moran, brother Reggie (Linda), sisters Kathy (Jack-2016), Joan (Tom) and Cyndy (Mark-2018), many nieces and nephews, in-laws Louie and Kitty Clemenson and their children Chris and Jennifer, brother-in-law Paul Leding (Roxanne), friends Jan, Christy and Carly McClain and numerous other friends. He is predeceased by his wife Mary Anne (2011), brother Doug Bays (2020) and sister Dayna Barbour (David), (2010).

The family of Warren Francis Bays created this Life Tributes page to make it easy to share your memories.

Warren Francis Bays, 86, of Aitkin passed away at Poinciana Medical...

Send flowers to the Bays family.