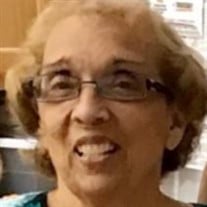 Virginia Chevalier Padilla aka GiGi was born November 16, 1939 in Brooklyn,NY. Her parents were Fernando Chevalier and Angelina Cruz Chevalier. She was the youngest of eight siblings. Her older siblings were Carmen, Petra, Jesu, Ramona, Fernando, Sejo, Maurice, Clara, Carlito, and Charlene. She spent her early childhood growing up in downtown Brooklyn. She spent her teens and early adult hood living in East Harlem Manhattan with her family. She attended Julia Richmond High School in the upper East side of Manhattan. In her late teens, she became aquainted with Jose Ramon Padilla aka Joe. The young couple dated and married on June 14, 1958 in NYC. The couple spent there early years living in Bronx, NY. The couple later moved to Brooklyn and later spent their retirement years in Kissimmee, Florida. In Brooklyn, Virginia raised her four children Joseph Michael, Karen, Steven, and Selina. Virginia was a dedicated and loving mother to her family. After Virginia’s children were grown she enjoyed spending time taking care of her grandchildren. Virginia spent many years working as a clerk in a The Federal Reserve Bank, Sears department store, and later retired as a Teacher’s Assistant from the Brooklyn School for Special Children in Bensonhurst, Brooklyn. There, Virginia spent many years caring for children with special needs. Virginia loved her work and enjoyed spending time with her friends and colleagues at work. Upon her retirement, Virginia spent her later years in Kissimmee, Florida with her husband Joe. Due to Virginia’s vibrant and bubbly personality she established many new friendships in Florida. Many friends became members of her large extended family. During her later years, Virginia loved spending time with family and friends. Her dedicated and loving husband Joe cared for Virginia during her later years. Virginia is survived by her husband Jose aka Joe, daughters Karen and Selina, son Steven, grandson Dexter, grandson Stephen, granddaughter Justia, step grand daughter Kari, step granddaughter Izael, great grand daughter Marea, great granddaughter Julia, great grandson David, son in law Roger, daughter in law Juna, and son in law Jose. Last but not least, Gigi is survived by her devoted baby aka Lucky. Lucky remained by his mother’s side till her final moments. Gigi will be lovingly remembered by her many nieces, nephews, and other family members. May Gigi rest in peace in the loving arms of God in heaven. It brings comfort to her loved ones knowing Gigi is at peace with her late son Joseph Michael, her late grand daughter Felicia, and many other of her family members.

Virginia Chevalier Padilla aka GiGi was born November 16, 1939 in Brooklyn,NY. Her parents were Fernando Chevalier and Angelina Cruz Chevalier. She was the youngest of eight siblings. Her older siblings were Carmen, Petra, Jesu, Ramona, Fernando,... View Obituary & Service Information

The family of Virginia Chevalier Padilla created this Life Tributes page to make it easy to share your memories.

Send flowers to the Padilla family.