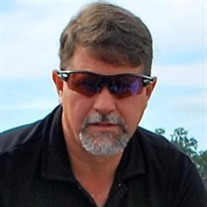 Tim Parks, 60, left us on August 5, 2021 with his family by his side in St. Cloud, Florida. Tim was born on May 26, 1961 in Zanesville, Ohio to Richard W. Parks and Sally L. Cabay. When Tim was 11, the family including older brother Tom moved to the Orlando area in 1972. While attending Oakridge High School, he met the love of his life and high school sweetheart Sue. They graduated in 1979 and were married on February 16, 1980. By the age of 20, they had two children, daughter Elizabeth (Yibbs) and son Richard (Ricky). In 1994, they moved to the St. Cloud area where they currently reside. Tim was a great provider for his family and always put their needs and wants before his. Tim always told everyone that as long as he had his family, he was the richest man in the world. He not only was a person his family looked up to but to anyone that considered him his friend. He was a dedicated worker for his employer for over 40 years, always on the go and made sure everyone in his life had what they needed and never complained about it. If Tim wasn’t working, you would find him at the football field watching his grandsons from the stands or coaching on a baseball field with his grandsons’ team. When he had time, he enjoyed playing golf and watching his favorite sports team such as the Cleveland Browns, Ohio State Buckeyes and UCF Knights to name a few. Tim was a one-of-a-kind man. He was genuine, caring, and lived his life through his heart. Tim Parks is survived by his wife Sue Parks, daughter Elizabeth (Yibbs) Carlson, son Ricky Parks and daughter-in-law Heather Parks, with 6 grandchildren, Brianne, Hunter, Ayden, Dalton, Keyra, and Emme and one great-grand-daughter Briar; Step Mother Dolores Parks, Brother, Tom Parks, Step-sister Diane (Joe) Sparrow, Step-brother Craig (Bonnie) Martin, Step-sister Dorene (Ben) Carter, nephew Steven, Bryan, Zachary and niece Tori, Erin Celina and Nicole. His Celebration of Life will be held at Harmony Golf Preserve located at: 7251 Five Oaks Drive, Harmony, 34773 on Thursday August 12th from 5:00pm-8:00pm. There is a Reflections Service that begins at 6:00pm and the family would like to welcome anyone who would be open to sharing memories or stories at that time to speak. At the family’s requests, we ask that you follow the CDC guidelines concerning Covid-19. In lieu of flowers, the family asks that you please make a donation in honor of Tim Parks to Harmony High School Athletic Booster Club: [https://harmonyathleticboosters.com/]

Tim Parks, 60, left us on August 5, 2021 with his family by his side in St. Cloud, Florida. Tim was born on May 26, 1961 in Zanesville, Ohio to Richard W. Parks and Sally L. Cabay. When Tim was 11, the family including older brother Tom moved... View Obituary & Service Information

The family of Timothy Alan Parks created this Life Tributes page to make it easy to share your memories.

Send flowers to the Parks family.