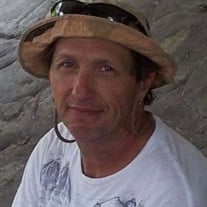 Let us remember the life of a great man – Terry Lee Curtis Terry Lee Curtis was a great man. He was born to the late Bobby D. Curtis and Dolores Thummel on March 4, 1959 in Chicago, Illinois. He was loved dearly by his wife, Sally Curtis, his brothers and sisters Kevin Curtis, Jeffery Curtis and Carol Snider, and the late Debbie and Marian Curtis, and his children, Mandi & Joseph Solie, Joseph & Sarah Curtis, Robert Newell, Megan & Zachary Wood, Amy Suslenti and Tyler Curtis. He was treasured by his 8 grandchildren, Sean Curtis, Russell Curtis, Megan Curtis Solie, Kaiden Curtis, the late Braxton Curtis, Landon Curtis, Noah Wood and Lily Wood, who will cherish the memories they have made together. Terry was a hardworking man, who had a long career both in the Army as a Corporal and well after. Hardworking and determined characterized this strong loving friend, brother, father, grandfather, and husband. When Terry was younger, he loved his family, friends, music, and his long hair. It was hard to find Terry without his perm, brown leather jacket and hoop earring. When Terry wasn’t at a concert, he was acting as a role model for many children. He would gladly step up and take in neighborhood kids who needed a place to stay. There are many people who called Terry a father who were not his biological children. After Terry left the Army, he continued to work for numerous employers always staying busy and providing for his family. When Terry wasn’t working, he was spending time listening to music, watching the Chicago Bears, or anything on the History and Discovery channel and was an avid ghost hunter. He loved spending his days off on the water sailing or relaxing on the beach. After relaxing by the beach, he would spend his evenings at his favorite restaurant, Coconuts on the Beach, located in Cocoa Beach, Florida. He would rock out to the live music while he enjoyed his food. Terry loved to host dinners with his family and would cook a delicious London Broil. On April 20th 2013, Terry married the love of his life and found a partner to rock out with. Terry Lee Curtis was a great man, who lived everyday to the fullest. He will be missed by all who knew him. As we try to find peace in God, family, and friends to mourn the loss of Terry, let us remember this quote by one of his favorite bands: “My soul is painted like the wings on butterflies, Fairytales of yesterday will grow but never die” – Queen, The Show Must Go On

Let us remember the life of a great man &#8211; Terry Lee Curtis Terry Lee Curtis was a great man. He was born to the late Bobby D. Curtis and Dolores Thummel on March 4, 1959 in Chicago, Illinois. He was loved dearly by his wife, Sally Curtis,... View Obituary & Service Information

The family of Terry Lee Curtis created this Life Tributes page to make it easy to share your memories.

Let us remember the life of a great man – Terry Lee Curtis
Terry...

Send flowers to the Curtis family.