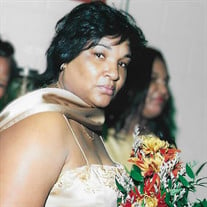 Sonia Marie Anderson was born Sonia Marie Symes in Kingston, Jamaica to Frank and Isabel Symes on August 13, 1956. As a child, Sonia could be found picking and enjoying guineps, every type of mango, and many other tropical fruits. As the eldest of 4 girls, she left her sisters behind and immigrated to the United States in 1968 at the age of 12. Upon arriving, Sonia lived in the Bronx, New York, with her Aunt, Waple Baitty. This was a significant transition coming from the island sunshine of Jamaica to the winter cold of New York. There she attended and graduated from all-girls Walton High School. She later attended Lehman College in the Bronx. Sonia married her then husband, Claude Evans, in April of 1976. While in New York, Sonia and Claude had 5 of their 6 children, Candace Evans, Nathan Evans, Micah Evans, Joseph Evans, and Hannah Ayanna Evans (Rutledge.) Striving for a better life for her children, Sonia decided to leave New York. The family moved to Florida in the summer of 1986 and in 1990, they welcomed their youngest son, Aaron Evans. Sonia fervently loved her children and especially her grandchildren. She was a real mother in every sense of the word. With 5 older children and a toddler at her hip, she defied the odds, exercising her entrepreneurial spirit and opened a Jamaican Grocery Store & Ice Cream Parlor. Prior to relocating to Florida, Sonia started nursing school, but sacrificed her personal career goals to care for her growing family. Through her persistence and grit, Sonia Marie, a natural born care-giver, finally attained a degree in Nursing in 1995 from Broward Community College. In this career, she was able to utilize her divine gift of giving and caring. Sonia flourished as a nurse, loving and taking pride in her career and her patients. In October of 2012, she remarried to her now husband, Norman Anderson and they truly enjoyed each other. She continued to work as a nurse until she retired in December of 2019. Throughout her years, Sonia helped so many people in so many ways. She was a fearless woman who took risks that many people wouldn’t, always with the intention to help improve the lives of those she loved, their children and sometimes even strangers. She lived with a courage that may have been misinterpreted by some. However, the essence of her bravery came from her deep knowledge and understanding that she was a child of the Most High God and that He ALWAYS had her back. Sonia understood that there were “rules” of man, but she decided to surrender to the rules that she felt God had given her. Sonia loved the Lord and despite anything life had thrown her way, she would always say, “I feel like a spoiled child the way God has been so good to me.” She was a humble woman, but loved herself. Although she knew she was gorgeous, whenever given a compliment on her physical beauty, she’d reply “By the grace of God.” She would give to others even when she didn’t have. Sonia loved, respected and appreciated children. So much so that she delighted in anonymously paying off lay-away’s for accounts that had lots of toys during the Christmas season. Sonia loved and opened her home to all her children’s friends and was a mom to the entire neighborhood. Sonia held high standards for those she loved and was adamant about ensuring that her environment and her space always met her criteria. Sonia Marie was known for her fiery tongue as she would speak her mind when and how she saw fit, sometimes to the shock or embarrassment of those around her. She was exciting to be around! She had a light that shined so bright that those in her presence experienced healing, real laughter and true joy. She loves from the heavens, her 6 children, her husband, Norman Anderson, her ex-husband and great friend, Claude Evans, 4 grandchildren, Angel-Marie Evans, Kamari Burns, Chaniya Rutledge and Charlotte Rutledge, 3 sisters, Andrea McCoy (Husband Roman), Sharon Bridge (Husband Raphael), and Michelle Jureidini (Husband Gerry). She will also be missed by her aunt Stella Claire Symes, 3 uncles, Peter Ellis, Luther Ellis, and Joseph Ellis, many nieces and nephews and a host of beloved family members, in-laws and friends.

Sonia Marie Anderson was born Sonia Marie Symes in Kingston, Jamaica to Frank and Isabel Symes on August 13, 1956. As a child, Sonia could be found picking and enjoying guineps, every type of mango, and many other tropical fruits. As the eldest... View Obituary & Service Information

The family of Sonia Marie Anderson created this Life Tributes page to make it easy to share your memories.