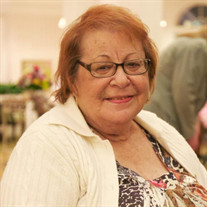 Sondra Crane December 17, 1930- May 17, 2021 Sondra Crane was a daughter, a sister, a wife, a widow, a mother, a grandmother, and a great-grandmother. She was a writer, artist, teacher, classical pianist and a College Graduate at age 65. She was an independent woman who raised 3 daughters and survived her husband’s death at age 39. She was born and grew up in Brooklyn New York. Later moving to Toms River, New Jersey. She is survived by three daughters; Abbe, Randi and Karen, five grandchildren and five greatgrandchildren. For the last 30 years she lived in Kissimmee/St Cloud, Florida near her youngest daughter Karen Crane, her grandson; Jason Crane, granddaughter Crystal Puchalla and her three great grandchildren; Arianny, Sommer and Brookelyn that she loved all dearly. She’s always looked younger than her age and in fact remained 50 years old most of her life until her eldest daughter turned 50 and reminded her she can’t be 50 with a 50 year old daughter. Our mom was a warm, lovable, funny, intelligent, give you food from her mouth if she thought you were hungry, outspoken, a real trouper kind of person. She liked to kid around and could give it as well as take it. The walls of her home were adorned with her many beautiful art work, sculptures, paintings and family pictures. Our living room home to her Baby Grand piano, which she won several awards on. After her husband’s death; She went to work as a stenographer for the Suffolk County Medical Examiner. She would come home from work and tell morbid stories to us of how people died; perhaps this contributed to her three daughters growing up and living a life on the straight and narrow. When the computer came out she was one of the first people to purchase one. She figured out how to set it up, manually install all the software and found black hole chat rooms to meet people. She wrote about her adventures of meeting people from faraway places in cyberspace as it was once called. She compiled two books filled with her poems which tell about her family and her life experiences. She wrote a children's book, New York times interviewed her for an article, as well as Growing Bolder came to her home and video interviewed her. She was one of the main contributors at the onset of Wiki-how, was the first person to suggest and post pictures to articles on their website and personally reconstructed and edited thousands of articles on their website. She had a blog; alonglifepath where she posted her beautiful poems and stories. Our mom also wrote articles for advertising when the internet came out. She would sit at her desk for hours constructing an article around a handful of words the company wanted to use in an article. She could make the article about anything as long as those words were included. She became very creative and was sought after to write their many ads. She was a good person who unfortunately was diagnosed in 2015 with vascular dementia, thyroid cancer and metastatic stage IV breast cancer. She was a fighter and outlived the 3-4 years the doctors gave her. For most of her life her typewriter and later her computer was her company and solace all day till wee hours of most nights. She had lots of friends around the world she would converse with through the computer. With the progression of her dementia; the loss of being able to use her computer was devastating to her. She felt lost without it. Her quick mind and communication with the written and spoken word was her and her life. Our mom was a lovely woman who just wanted to laugh, be happy and have fun. She left this world at home at peace with family by her side. She will be greatly missed. https://growingbolder.com/stories/meet-sondra-crane/

Sondra Crane December 17, 1930- May 17, 2021 Sondra Crane was a daughter, a sister, a wife, a widow, a mother, a grandmother, and a great-grandmother. She was a writer, artist, teacher, classical... View Obituary & Service Information

The family of Sondra Crane created this Life Tributes page to make it easy to share your memories.

Send flowers to the Crane family.