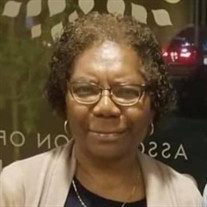 In Remberance of Scheryl L. Allen Scheryl L. Allen was born in Palatka, Florida on January 15, 1949 to Edward Lawrence James and Edna Louise Bell. Scheryl relocated with her family to Boston, Massachusetts where she met the love of her life, Joe E. Allen. On May 2, 1966 they were joined as one in holy matrimony. They would continue in a wonderful, loving marriage for 49 years. While in Boston, Scheryl worked for several years as a data entry operator at State Street Bank and as a manager at Kentucky Fried Chicken. In addition to working her jobs, she was a devoted home maker to her husband and children. In 1975, she studied the bible with the Jehovah’s Witnesses and was baptized as a symbol of her decision to begin her nearly 46 years dedication to Jehovah. In 1987, she reloacated with her husband and children to Kissimmee, Florida where she has resided for the past 34 years. While in Kissimmee, she worked for the Osceola County School Department and continued volunteering teaching others the bible with her local congregation. Scheryl was a vibrant, outgoing pillar of strength and served as the matriarch of her family. Over the years she was blessed with four daughters, 8 grandchildren, 7 great-grandchildren, three beloved sisters and a brother. Scheryl passed peacefully on August 27, 2021. She was preceded in death by her husband and her parents. She leaves to cherish in her memory her daughters, Twilla Williams (Nathaniel), Nichelle Allen-Welch (Ronald), Melissa Allen, Janaye Allen-Anderson (Duwayne), her grandchildren, Latasha, Nathaniel (Kerron), Tyanna, Jayda, T.J., Justin, Evan, Ryan along with a host of great-grandchildren, Nathaniel, Sam, Mariah, London, Laia, Daniel and Aryanna. She also leaves her sisters Belinda Pitts, Shaquanna Pitts, Phyills Robinson and her brother Anthony Pitts (Mary). Scheryl had a wealth of other close family members and friends who will miss her dearly.

In Remberance of Scheryl L. Allen Scheryl L. Allen was born in Palatka, Florida on January 15, 1949 to Edward Lawrence James and Edna Louise Bell. Scheryl relocated with her family to Boston, Massachusetts where she met the love of her... View Obituary & Service Information

The family of Scheryl L Allen created this Life Tributes page to make it easy to share your memories.

In Remberance of Scheryl L. Allen

Send flowers to the Allen family.