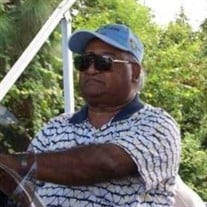 Roy “Jerry” Beharry December 14th, 1946 – July 7th, 2021 His work is done. A life well-lived. His time with us was not nearly long enough. There was so much more left for him to do. So much more for him to see. So much love still left to give. This was his time, however, and he has been called home. He went as he lived…on his terms. We were beyond fortunate to have him for the time we did, and for that, we are thankful. Roy Beharry, or “Jerry” as he was known to many, was born in Fyzabad, Trinidad on December 14th, 1946 and departed from this life in Poinciana, FL on July 7th, 2021 at 74 years of age. He is survived by his wife (Zennifer), sons (Roy and Jerry), daughter (Jennifer), grandchildren (Shanta, Roy, Naveena, Marcaysh, Seroya, Jayan, & Avni), as well as great-grandchildren. He is also survived by his brother (Ankoi), and sisters (Joyce, Vanessa, Savy, and Renuka). He was preceded in death by his father (Pollonais), mother (Sancharie), and brother (Deodath). He will be greatly missed by numerous other relations, and countless friends that he made family. This was his gift. He was a man who took great joy in helping others. His life was spent not looking for riches, but rather looking for ways to enrich the lives of others. Always a popular guy, and a fun person to be around in Trinidad, he left for Boston to set up a better life for his family. After leaving Boston, he became most recognized in his life as the owner/proprietor of B&C Tropical Variety Store when he opened it in Poinciana back in 1988. From that location, he would go on to form countless friendships, many of which were still intact to his final day. That store was an extension of his home, and when you walked through those doors, he treated you like family, not a customer. He meant so much to so many, and whether you had the privilege to call him a husband, father, brother, grandfather, uncle, cousin, or friend, just know that those relationships are what meant the most to him during his life. Carry the memories forever, because so long as we do, he will always live within each of us.

The family of Roy "Jerry" Beharry created this Life Tributes page to make it easy to share your memories.

Send flowers to the Beharry family.