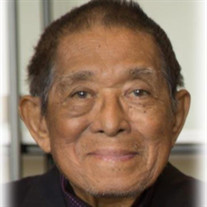 Dr. Roberto V. Morona Sr. passed away on October 13, 2021. He was born in Malabon, Philippines on July 18, 1938, eventually enrolling in The University of the East College of Medicine in Manila. It was there he met many dear lifelong friends as well as his eventual wife, Jessie. He first told her he loved her there, too. As he waited for her response, she told him that he did not have to ask her because he should already know the answer. And so a big, beautiful love story kicked off. The duo arrived in America with their medical degrees and $300 in 1965, settling in the Greater Cleveland area. Their strongest roots were put down in Strongsville, Ohio, giving their children Michelle, Roberto Jr. (Rob), Joey, and Lito an amazing childhood full of love, laughter, and adventures. It was there where he was easily persuaded by his kids for a toy or treasure during a trip to the mall (much to Jessie’s chagrin). Bobby instilled a deep love of the Cleveland Browns into them and braved the snowy, windy roads to the Richfield Coliseum for Cleveland Cavaliers games with the twins. He taught them all so many life lessons, including how to slide into the back of church so no one knew you were late. One of the biggest, though, was how to be a devoted partner. He broke out of his comfort zone to learn the cha cha and tango with his wife because dancing brought her so much joy. He lived to love her! Dr. R and Dr. J started a joint private practice and worked out of Southwest General Hospital. They showed their patients grace and kindness as they impacted so many lives. Their children, in fact, often felt like their parents were local celebrities. The pair deeply cared about their community. But most of all, they loved their family, which joyously grew over time to include grandchildren Justin, Alexa, Marissa, Branden, Lito Jr., and Isabella, as well as son-in-law Howard (husband of Michelle) and daughters-in-law Marithes (Rob) and Amy (Joey). Bobby is also survived by his sister Inday. Bobby truly adored spending time with those beloved grandchildren. His curious nature and sense of fun remained strong for his entire life, resulting in lots of interests. He enjoyed music of all genres and traveling the world, as well as sharing both of those said interests with all of his Facebook friends. His family will miss him for all of their days. But his legacy will live on in each of them. Here are a few ways you could pay tribute to Bobby: Embrace the small things. Take a picture of a pretty flower or snap a selfie. Buy a good pen. Ask someone a question and truly listen to their response. Pet a dog. Eat a delicious meal (and follow it up with Halo Halo!). Laugh and smile and enjoy the ride. In lieu of flowers, please consider making a donation to the Roberto V. Morona Trust, 501 Mirasol Circle apt. 102, Celebration, FL 34747

Dr. Roberto V. Morona Sr. passed away on October 13, 2021. He was born in Malabon, Philippines on July 18, 1938, eventually enrolling in The University of the East College of Medicine in Manila. It was there he met many dear lifelong friends... View Obituary & Service Information

The family of Roberto V Morona Sr. created this Life Tributes page to make it easy to share your memories.

Send flowers to the Morona family.