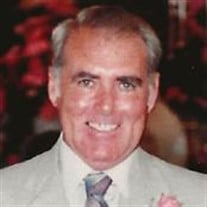 Robert Charles Weathers, 88 of St. Cloud passed on to be with our Lord on Wednesday March 17, 2021 at home among family after a long battle with Parkinson’s disease and cancer. He was born in Chattanooga, TN on October 7, 1932, the youngest child of Thomas O. Weathers, Sr. and Bertha Marie Taylor Weathers. He was preceded in death by his parents and all of his 10 siblings except for one brother. He is survived by his loving wife, Bertie, his two sons, Gary Weathers and Tom Weathers (Lisa), his two daughters, Sherrie Johnson (Neute) and Donna Margison (Donald) all of St. Cloud, along with his grandchildren, Randy, Stephanie, Kevin, and Andrew Weathers, Nick and Kyle Margison, and Amanda Johnson Goodman. He is also survived by one brother, Taylor J. Weathers of Fruitland Park, and 12 great grandchildren and extended family members. He moved to Osceola County from Miami 50 years ago to work with his brothers at their business, Osceola Petroleum Company. After retiring in 1981, he bought a farm in north Florida where he started his love of working on properties and reselling them which he continued to do when he returned to Osceola Co. in 1988. He was an ordinance mechanic in the Army’s Hell on Wheels 2nd Armored Division’s 17th Armored Engineer Battalion in Germany in the 1950’s and also notable, a top player on the Army Travelers golf team. He was an accomplished golfer briefly going pro and later participating in local Disney pro-am tournaments. He enjoyed golfing with his life-long golfing buddies and even his young grandchildren until the Parkinson’s disease made golfing too difficult. He was a loving father and grandfather who enjoyed traveling all over the country with his wife Bertie in their RV and later with his children and grandchildren to TN and NC for vacations in the state parks and visiting family in the Chattanooga TN area. A private memorial service will be held for family members. The family prefers in lieu of flowers, to please make a donation to your favorite charitable organization in Robert's memory.

Robert Charles Weathers, 88 of St. Cloud passed on to be with our Lord on Wednesday March 17, 2021 at home among family after a long battle with Parkinson&#8217;s disease and cancer. He was born in Chattanooga, TN on October 7, 1932, the youngest... View Obituary & Service Information

The family of Robert Charles Weathers created this Life Tributes page to make it easy to share your memories.

Robert Charles Weathers, 88 of St. Cloud passed on to be with...

Send flowers to the Weathers family.