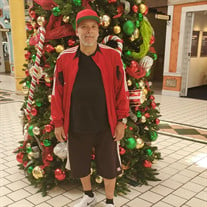 Robert Anthony Feliciano age 63 yrs old of Orlando, Florida, passed away on Saturday April 24, 2021 at Osceila Regional Medical Center. Robert Anthony Feliciano was born in Bronx, New York on February 18, 1958, the son of Angelica Felicano and Pedro Feliciano, Robert went to high school in Bronx, New York, Robert is also survived by four sons Robert Feliciano Jr of Virginia, Christopher Feliciano, Nico Feliciano, Jeremiah Feliciano all of kissimmee, Fl and Grandson Corey Feliciano the son of Robert Feliciano Jr. Darlene Robbins the sons of Christopher, Nico and Jeremiah and Robin Goins the son of Robert Feliciano Jr. Sisters Jeanette Callahan and Carmen Sorrento of Queens NY. Numerous aunts, uncles, cousins, nieces and nephews.The Lord has Blessed Robert Athony Feliciano with four strong sons Robert Jr. Christopher, Nico and Jeremiah, Robert was a Christian believer, he always believed in God and say Lord Jesus is his savior he serve God, he serve others, he did God's will. He was a good man he had a good heart, he will always be remember and missed very very much Robert is always within our hearts, Everyone Loved Robert, family, friends, people in his community, he always Loved to help anyone, he care and love people he was very caring and helpful and loving. Robert always showed love. Know matter whom they was he was always there to help who's in need from New York to Florida, Robert the Rescuer! Robert always made Everyone laugh he was just so funny! Darlene : Robert always my BFF I will never forget you lossy, I called Robert lossy because when I asked him something he seems to be lost sometimes, like for example I ask lossy did you eat and he didn't remember if he ate knowing that he knows he did by the looks of tummy! (With laughter). Or if anyone asked him something he was lost! (With laughter) Aka lossy! Robert loved Riding his bike he used to say this is my transportation! When Robert came over to visit us, In the morning he always asked do I want him to make me breakfast and I say please wash your hands Lossy! (With laughter) Robert always say Dee are you ready I'm gonna get the car from garage! We always had fun in the house watching movies with kids, Robert always liked to go with me to take kids outside Tawn and Mimi or anytwhere I needed to go he just was there. Tawn and Mimi really liked Robert! He prayed with Tawn and Mimi and like to bring them lil toys when he came from Orlando and liked to play with them! Jeremiah: Robert was so lost, we had made a money deal onetime and he had wanted me to buy him something cause he didn't have the money for it so he said can you buy it for me and I'll pay you back when I get paid, so I bought it for him, so when in time he gotten paid I had mentioned it to him and he says sorry brotha I dont remember me telling you that I said stop playing (with laughter) he say again sorry my brotha, so I said dont let me see your wallet laying around BROTHA, but I was just playing lol. Nico: Robert would watch me going in the kitchen getting food and even though he was the one that ate more than everyone! (with laughter) Robert always liked to go to my sister's house he called her twin everytime when he went to visit at her house or when he sees her, Robert always enjoyed having fun times, he liked to throw out her trash, Robert the Rescuer! (With laughter) Venus and Gran always laugh about Robert when he does Silly things and Dinesha would sometimes record him when he's doing hilarious things and would record him when he be getting down dancing! (with laughter) We all misses Robert very very much everyday, Robert is always remember, Robert is always within our hearts. We all Love you very very much Robert

The family of Robert Anthony Feliciano created this Life Tributes page to make it easy to share your memories.

Send flowers to the Feliciano family.