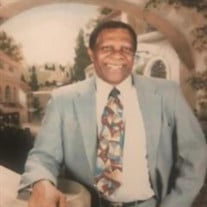 CELEBRATING THE LIFE AND TIMES OF THE LATE REV. SYLVESTER JOHNSON. The Eulogy for Rev. Johnson will focus on his life, and dedication to the service of the Lord. After accepting the call of salvation on June of 1965 in the Paisley Pen, Clarendon Jamaica, Pastor Johnson surrendered and dedicated his life to serving the body of Christ in many different ministries. Beginning in 1970 when he became the young president of Pentecostal C.O.G in Jamaica, and served as the Pastor for the parish of Clarendon. Pastor Johnson pastored many churches in Jamaica namely Sandy Bay, Pennantwood PCG and Effortville PCG. He migrated to Toronto Canada in the early 70’s and in 1973 he was one of the first persons with others to establish the church in Toronto Canada, which is still active today. In 1980 he relocated to the United States and after a short time he was at it again with the vision of planning a church in Paterson, NJ. Along with eight other people, he started a church in the home of Rev. and Sister Lipton Robertson. On May 29, 1983 the church was officially chartered as Trinity Pentecostal Church of God located at 550 East 23rd Street, Paterson, NJ. He also was instrumental in establishing a church in Chennai, India and another church called Light House Ministry in Paterson, NJ. The late Rev. Johnson is survived by his beloved wife Mrs. Paula Johnson with her children and grandchildren, son Alan and wife Debbie Campbell along with their children Michael and wife Marielle, Krystal, Anjelica, Nicole, and Nicole’s husband Ben. Daughter Tracey and husband James Anglin with sons Colin and Carter. Nieces Velvet and Brielle. Sister-in-law Alsie Falconer and husband. His daughter Marvalee Waite with her children, daughter Anataseia Robinson with her son Nathaniel McAnuff, Clifton Robinson and daughter ShellyAnn and husband Jason Hall with their children Shania Wilson, and Chad Hall. Rev. Johnson’s sister Norma and brother Howard who reside in the UK. His belated parents Mr. and Mrs. Johnson and extended family in England. One sister in Jamaica. Goddaughter Jacqueline Hutton in Texas and Godson Kelsie. Extended family and friends in America, Jamaica, India, Philippines, Canada and too many names to be listed. We celebrate, and cherish his mission which he accomplished here on earth knowing that many souls are added to the kingdom of God because of his obedience to his calling. You are loved and will be dearly missed. May your soul rest in peace and in the hands of Jesus. Keep singing, keep playing the guitar until we meet again! “Absent in the body is to be present in the Lord”.

CELEBRATING THE LIFE AND TIMES OF THE LATE REV. SYLVESTER JOHNSON. The Eulogy for Rev. Johnson will focus on his life, and dedication to the service of the Lord. After accepting the call of salvation on June of 1965 in the Paisley Pen, Clarendon... View Obituary & Service Information

The family of Rev. Sylvester A. Johnson created this Life Tributes page to make it easy to share your memories.

CELEBRATING THE LIFE AND TIMES OF THE LATE REV. SYLVESTER JOHNSON.

Send flowers to the Johnson family.