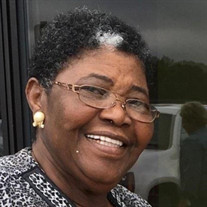 Princess was born to her loving devoted parents Johnson Simon and Victoria Prime on April 18, 1942, in the sunny Island of Carriacou in Grenada, West Indies. She attended the Dover Model School. Her earlier years were spent residing on the Island. In 1976, she migrated to the United States of America. Here she spent many years working as a nursing assistant at the Mary Manning Nursing home in Manhattan, NY. She was extremely passionate about her job of taking care of many individuals, and forging great friendships alongside her colleagues. She worked extremely hard to make sure she provided for her nine children. In 1990, Princess relocated to the sunshine state of Florida in Kissimmee. Here she continued in her profession for seven years until she retired. Over time, she then took on the role of being care giver to her twenty four grandchildren, given to her through the love of her children. This made her happier than ever. As far as she was concerned, “no one could take care of them better than her.” She truly adored every one of them. Each one of them holding a unique special place within her heart due to the many life experiences she shared with them. Just like she did for her own children, her grands were well provided for, Nurtured, grounded in love, and taught the word of God from a very tender age. As the years passed, her children diligently visited her regularly, or she visited them regardless of whichever state they resided in. Princess was truly one of God’s workers and angels. She lived by his word her entire life. When Princess arrived at church on Sunday’s she would attend with her army of grandchildren alongside her, where they took over an entire pew. In addition, because of her love for Jesus Christ, she was able to foster many friendships within her church and community. Many gravitated to her infectious heart and laughter. Princess will be missed by all for her enormous loving heart and kind spirit, which will never be forgotten. Her unique characteristics forever embedded within us all. She leaves behind heartbroken: Her children Dave Simon, Earline Martin, Brent Roseman, Brenda Yard, Jacqueline Thompson, Patrick Roseman, Henry Roseman, Lester Roseman, Merline Roseman and Richard Roseman who proceded her. 3 son in laws & 2 daughter in laws. Siblings: Norris Simon, Stanley Simon, Amos Simon, George Prime, and Emmanuel Simon. 24 Grandchildren, 11 Great Grandchildren, and a host of Nieces, Nephews, Cousins, and friends.

Princess was born to her loving devoted parents Johnson Simon and Victoria Prime on April 18, 1942, in the sunny Island of Carriacou in Grenada, West Indies. She attended the Dover Model School. Her earlier years were spent residing on the... View Obituary & Service Information

The family of Princess Adora Roseman created this Life Tributes page to make it easy to share your memories.

Princess was born to her loving devoted parents Johnson Simon...

Send flowers to the Roseman family.