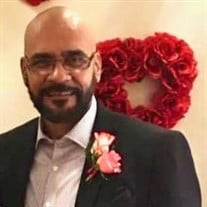 Peter (Pete) Medina of Davenport, Fl was called to paradise on May 8, 2022. Though he lived in Davenport Florida his heart was always in Brooklyn New York were he was born at Saint Peter’s hospital on August 17, 1957 to Francisco and Juanita Medina in Brooklyn, NY. Peter enlisted into the United States Army on August 29,1974 completing boot camp at Fort Polk in Louisiana. Peter’s MOS was 11B(bravo), infantry. After boot camp Peter was then stationed at Fort Kobbe Panama and assigned to the 193 infantry brigade attached to the 508th infantry regiment. He was a part of a three man crew whose unit call sign was The Bandidos. The Bandidos operated as ground defense in the jungles of Panama. After completing his service on September 9, 1977. Pete returned to Brooklyn New York where he developed his skills as a service technician as he worked for many companies in the New York area, as well as being a jack of all trades. Outside of work Pete was a rare gem, a class act, a true gentleman, a man’s man. Always helping people, always there for whoever needed him. If you needed to find Pete you only needed to check the handball court, the meeting place where family and friends socialized or doing one of his most prideful things working on his car. Predating YouTube instructional videos, Pete could completely disassemble an entire engine and reconstruct it to a working order relying only on his skills and the owners manual. On August 17, 1997, at a party, Pete met his love, Sam for the first time. From that moment they were inseparable, glued at the hips. For the next 26 years they would remain tethered by love at each other’s side. Having mastered his skills as a service technician and become a mentor in the trade, Pete decided in June of 2007 that while New York would always be with him, he would trade the cold weather state for the warmth of the Florida sun. Pete and Sam moved to Florida and after 20 years of friends and family asking him when he was going to pop the question, Pete and Sam married on July 1, 2016. In Florida Pete joined his work family at Osceola supply, as a service technician, mentoring his peers. In his off time, you would always know where to find Pete at, the ocean fishing with his American Express, which is what he named his fishing pole, because he never left home without it, or making memories with his loved ones. There is not enough space on this page to have people truly understand who Pete was to us. Because he was so many things to so many people. Pete had his faith and own beliefs. While we know of paradise and eternal life no one knows the secrets of what happens when we transition from this earth. We take comfort in knowing that now Pete knows this secret and we will see him again one day with a smile on his face excitedly showing us the beauty and wonders of that secret. Until then, we will honor him by carrying the lessons he taught us and the love he gave us always. As we sift through our grief we hear Pete telling us the same words he would tell us throughout life, “Always expect the unexpected.” Peter was proceeded in death by his brother Hector Medina, his mother Juana Medina and his father Francisco Medina. Peter is survived By his wife Sam Medina, his children Tina, Peter Junior, Petrice, Tyshawn, and his grandchildren Justin, Jayden and Brooklyn, his sisters Norma, Evelyn, Mildred, Jeanette, Theresa, and his brother William. Please join us at Peter’s celebration of life at the Osceola Memory Garden 3175 Pleasant Hill Rd Poinciana, FL 34746 May 20, 2022 from 5pm-9pm (ET)

Peter (Pete) Medina of Davenport, Fl was called to paradise on May 8, 2022. Though he lived in Davenport Florida his heart was always in Brooklyn New York were he was born at Saint Peter&#8217;s hospital on August 17, 1957 to Francisco and Juanita... View Obituary & Service Information

The family of Peter Medina created this Life Tributes page to make it easy to share your memories.

Peter (Pete) Medina of Davenport, Fl was called to paradise on...

Send flowers to the Medina family.