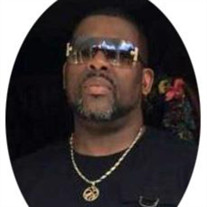 In the cool hills of Spalding, Clarendon, Jamaica, on March 17,1969, a son named Patrick Augustus Anderson was borned to Lucilda Weise and Aston Anderson. Patrick was raised by his beloved (now deceased) grandmother, Evelyn Anderson who loved him dearly and fondly called him “Daddy P”. That name stuck with him, and he was loving called “Daddy P” by those who knew him best. Patrick got his early education at the Kilsyth Primary school and later attended the Edwin Allen High School after successfully passing the exam for admission. After leaving high school he trained and acquired skills in welding in Spalding, Clarendon. He worked at Knox Community College with his newly acquired skill for years. He loved his job and supplemented his income as a private welder who designed and built dozens of gated, grills etc. During his years in Jamaica, Patrick was seeking a partner like any young man. It was then he met the love of his life, Karen Harrison. They loved each other dearly and were inseparable. A few years after they fell in love, they had a beautiful daughter, Shanelle. Several years later another beautiful daughter, named Cavel, was born. Karen and Patrick were married and enjoyed many years of loving each other. In 2008 he decided to migrate to Florida with his father who wanted the best opportunities for his son. He stated that leaving his family was one of the hardest decisions he’s ever had to make but decided to take on the opportunity. Patrick kept his family together by visiting Jamaica several times per year or have them visiting him here in Florida. Patrick worked at Sherwin Williams Paint Store for eleven years and enjoyed every minute of it. He was a people person who loved the comradery of his colleagues and customers. He was known there as a peacemaker, hard worker and was loved by a lot of persons. He also enjoyed gardening and landscaping and spent much of his time doing both recreationally and as a business. “Train up a child in the way he should grow and when he is old, he will not depart from it.” Patrick could be seen going to clean church and would also be sent to open the door of the Grantham Church of God in Jamaica when he was a child. He continued loving God and attending church here in Florida. He often said he was most at peace when he was in church. He loved reading his bible. Patrick was a true family person. He loved and admired all his many uncles, aunt, and aunts-in-law. He spoke of his uncles as if they were all his dads. He loved and appreciated his siblings, mom, and dad. His happy, grateful, caring, compassionate life to come to an end, so on July 20, 2021. Patrick took sick and was taken to the Osceola Regional Medical Hospital where he was diagnosed with Covid 19 Pneumonia. After undergoing several treatments, he developed multiple organ failure and other complications and died on July 20,2021. Partick leaves to mourn: his darling wife, Karen; 2 daughters Shanelle and Cavel; father, Aston (Kernal); mother. Lucilda; 6 sisters; 3 brothers; aunts, uncles, in laws, and a host of other relatives and friends who mourn his passing. Patrick, you will forever remain in our hearts! We love you but God loves you best. Rest in Peace Patrick and light perpetual shine on you!

The family of Patrick A Anderson created this Life Tributes page to make it easy to share your memories.