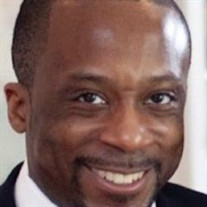 Born on November 24, 1973 to Aldith and Edgar Daley in Brooklyn New York, Norman Edgar Daley was the youngest boy of 3 children. He was an unexpected gift, and his sisters Sharon and Donna doted over him. They finally had a baby brother, and the whole family was delighted. When the family moved to Uniondale, Long Island in 1977, Norman attended Walnut Street Elementary School. Although his parents worked long hours, they nurtured Norman in his academics and extracurricular activities, including the school band (where he played saxophone), and Boy Scouts. When he began junior high school, he deftly navigated the challenges most face in middle school with his wit and humor; but his parents chose to transfer him to Friends Academy, where he quickly made friends and participated in music, theater, and soccer. Upon graduation from Friends Academy in 1991, Norman attended Williams College in Williamstown, MA, and graduated with a B.A. in English in 1996. He went on to obtain a Master’s in Education from City College NY. His interests in computers and technology led him to find work as a web developer at various companies, including the NHL, J. Crew, NursingHands.Com, and EverydayHealth.Com. As with his siblings, music was a significant factor in Norman’s life. In addition to piano lessons at home, and the instruments he played in school, Norman had a deep affinity for the drums. He was a member of the Redcoat Grenadiers, a fife, drum, bugle (and glockenspiel) corps in Uniondale; and he also performed with friends and others during and after his college days. He enjoyed various musical genres; and his passion was readily apparent whenever he discussed the details of a favorite song. Norman continued to live and work in NYC until 2014, when he decided to relocate to Poinciana, FL, and become his parents’ primary caregiver. Although he worked remotely, he more than ably fulfilled this new role, handling doctor appointments, prescription needs, and driving duties, to name a few; and he relished this time with them. When his father died in 2016, he continued caring for his mother, until her death in 2020. In 2015, Norman was diagnosed with diabetes, the same illness his parents both experienced. Though the disease slowly took its toll on him over the years, his spirit remained strong; and he found refuge in conversation with family and friends, podcasts on cars, food, and politics, and, as always, music. Norman passed peacefully on the early morning of Thursday, July 8th, 2021. He is survived by his sisters, Sharon Johnson and Donna Daley, his brother-in-law Mark Johnson, and loving family members and friends.

Born on November 24, 1973 to Aldith and Edgar Daley in Brooklyn New York, Norman Edgar Daley was the youngest boy of 3 children. He was an unexpected gift, and his sisters Sharon and Donna doted over him. They finally had a baby brother, and... View Obituary & Service Information

The family of Norman Edgar Daley created this Life Tributes page to make it easy to share your memories.

Send flowers to the Daley family.