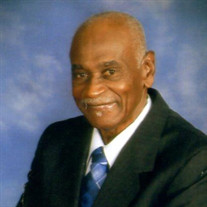 Noel Leonard McGhee, 87, of Sedburgh, Christiana in Manchester, Jamaica West Indies passed away peacefully on Friday, June 25th, 2021. Noel was born on April 6th, 1934. He was the 2nd born of Muriel and Leopold Percival McGhee. He spent his formative years in Christiana, Manchester where he attended Middlesex Elementary and Holmwood Technical School where his focus was on Agriculture. Later he moved to Lionel Town, Clarendon where he was a foreman at the Monymusk Sugar Estates. He then moved to Kingston, Jamaica where he married Sheila Tulloch. That union produced 3 sons. He migrated to the United States in 1969 and lived in Pennsylvania for a short time and then moved to the Bronx, NY. He worked as a Patternmaker in the garment district in Manhattan until his retirement. After his retirement he worked for the New York Yankees Baseball Organization for 2 years. He made yearly vacation trips to Florida with his sister and niece and loved the tropical atmosphere. They relocated to St. Cloud and in 2010 he moved to St. Cloud to be near them. He attended The Church of St. Luke & St. Peter where he served as an usher. On Tuesday nights he volunteered in the church-based project, “Feeding the People”. He also spent considerable time taking care of the church garden and helping with projects the Priest wanted done. He enjoyed spending time with his cousins and friends listening to music, playing dominoes and having fun exchanging stories of their lives. He is survived by his loving sister, Thelma, his sons Howard, Richard and Robert, his devoted niece Ann Marie, Grandchildren: Krystal, Joelle, Nikolai, Brittani and Cezare, and Great Grandchildren: Julian, Olivia and Jamie. His devoted cousin Henry, dedicated friend George MacArthur and extended family and friends will miss him dearly. Funeral services for Mr. McGhee will be held at 12:00 Noon on Thursday, July 8, 2021 at the Church of St. Luke and St. Peter, 2745 Canoe Creek Road, St. Cloud, Florida 34772. Family will receive friends in the Narthex of the church for viewing from 11:00 AM until the time of the funeral service. Noel will be laid to rest following the funeral service in Osceola Memory Gardens Cemetery in Kissimmee. In lieu of flowers, donations in Noel's memory can be made at www.stjude.org.

Noel Leonard McGhee, 87, of Sedburgh, Christiana in Manchester, Jamaica West Indies passed away peacefully on Friday, June 25th, 2021. Noel was born on April 6th, 1934. He was the 2nd born of Muriel and Leopold Percival McGhee. He spent his... View Obituary & Service Information

The family of Noel Leonard McGhee created this Life Tributes page to make it easy to share your memories.

Send flowers to the McGhee family.