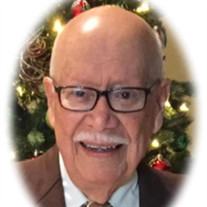 Miguel Angel Sanchez went to heaven on Saturday, May 22, 2021 at the age of 87, leaving behind a wonderful legacy. He was born to Ernesto Sanchez and Rosa Figueroa on February 21, 1933 in Comerio, Puerto Rico. He had three brothers and they moved to San Juan, Puerto Rico at a very early age. His father was the editor for The San Juan Star newspaper and his mother dedicated her life to missionary work locally. Miguel had an entrepreneur spirit since the age of 5, when he became a shoe shiner. He spent many years as a young child doing odd jobs to help his family. He took education very seriously, he never missed a day of school, aside from the day of his mother’s funeral at age 16 . He made the decision to enlist in the Air Force at just 17 years of age. Miguel obtained an MBA degree, traveled the world and spent many years in Japan. While he was in Japan, he became a Golden Globe Boxing Champion of the World, representing the Air Force. While on leave from the Air Force, he returned home and instantly fell in love with Heidi Marrero in 1955. He saw her near her home, and he told his brother that she would be his wife. Many joked that he was aiming high because Heidi was absolutely beautiful. Miguel was a very confident man! They were united in holy matrimony on December 21, 1957. This union was blessed with six children. They had a beautiful love story. Miguel continued to use his entrepreneurial skills working in the commercial real estate market, owned restaurants and hotels in Puerto Rico. During the 70’s and early 80‘s, he owned orange grove farms in Florida. As a family, the kids enjoyed lavish travel, spending many weeks enjoying the theme parks in Florida. His last venture as a businessman in Puerto Rico was to become part of the infomercial industry. He owned Puerto Rico TV Offers and was the first business owner to cross over into this industry in Puerto Rico. In 1983, Miguel moved his family to central Florida and purchased a family operated restaurant. He told everyone that he had never worked so hard in his life, but had so much fun working with his wife, Heidi and children. After the restaurant venture, he dedicated the rest of his career to commercial real estate. Heidi became sick with cancer in 2001, and Miguel became her care giver until her last day on January 28, 2007. He had many accolades in his life but taking care of Heidi was the one thing he was most proud of. When Heidi passed away, Miguel spent the rest of his years enjoying his children, grandchildren and great grandchildren. Their beautiful life will forever be cherished in the lives of their children: Nilda Rosa, Miguel Angel Jr., Heidi, Rosie Elena, Maritza Gigi, Michelle Nuria and their spouses. He has 15 grandkids, and 21 great grand kids. PSALM 23 A Psalm of David. 1The LORD is my shepherd; I shall not want. 2He maketh me to lie down in green pastures: He leadeth me beside the still waters. 3He restoreth my soul: He leadeth me in the paths of righteousness for his name's sake. 4Yea, though I walk through the valley of the shadow of death, I will fear no evil: for thou art with me; Thy rod and thy staff they comfort me. 5Thou preparest a table before me in the presence of mine enemies: Thou anointest my head with oil; my cup runneth over. 6Surely goodness and mercy shall follow me all the days of my life: And I will dwell in the house of the LORD forever.

Miguel Angel Sanchez went to heaven on Saturday, May 22, 2021 at the age of 87, leaving behind a wonderful legacy. He was born to Ernesto Sanchez and Rosa Figueroa on February 21, 1933 in Comerio, Puerto Rico. He had three brothers and they... View Obituary & Service Information

The family of Miguel Angel Sanchez created this Life Tributes page to make it easy to share your memories.

Send flowers to the Sanchez family.