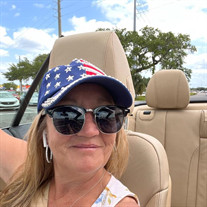 Michelle Gelinas Hill passed away unexpectedly on Saturday April 30th at the Osceola Regional Medical Center in Kissimmee, Florida. She was the daughter of Wayne Gelinas and Rebecca (Thorpe) GelinasSilver. She graduated from Scarborough High School in Scarborough, Maine in 1985.. At the time of her death she had worked for Rotech Healthcare Inc. for the past 11 years. She always considered Maine "Home" even though she has lived in Florida for the past 19 years. As a military wife, she lived in Massachusetts, West Virginia, North Carolina and Germany where she was able to travel extensively throughout Europe before moving to Florida. She found her soulmate and happiness when she met Michael Hill. After a few years of dating, they married in 2015. They were happily married for 5 years before Mike's unexpected death in 2020. Michelle began her involvement in various organizations as a member of the Scarborough Fire and Rescue while in high school. She was Secretary and Treasurer of the Holopaw Homeowners Association. She was also a proud member of Fire and Iron Motor Cycle Club Chapter 1, where she made many friends and was known as "Stitch" for all the badges she sewed onto members' vests. Never wanting to be bored while raising her four children, she had many hobbies. She enjoyed crafting, shopping, knitting, monogramming, collecting jewelry while shopping, sewing, home decorating, clearance sales, drinking liquids and shopping. She was an excellent baker and cake decorator. She made many beautiful and delicious wedding cakes throughout her life. She recently started Three Layers Cakery, making cheesecakes for PHYRE Brewery and Tavern in Saint Cloud which she was very proud of. She was also an excellent quilter. Her craftsmanship was flawlessly executed and her creativity was endless. She made many and promised one to each of her children that remain unstarted, unfinished or still enroute in the mail since 2010. She is survived by her mother, Rebecca Silver of Maine, grandmother, Virginia Thomas of New Hampshire, son Jonathan Pellerin and husband Mark of Maine, son Cameron Tetreault, his wife Amanda, grandsons Lucas and Oliver of Idaho, son William (Billy) Tetreault, his wife Aubrey, granddaughters Rylee and Everleigh, grandson Jayden, son Chandler Smith of North Carolina, sister in law Janeen Gelinas, nephew Kevin Gelinas and niece Courtney Gelinas and her four legged relatives, Millie, Charli, Bear and Allie who thought she smelled good. She is also survived by friends Wanda and Carrie of Florida who the family is grateful for watching over Michelle while in Florida. Besides her husband Michael, she is predeceased by her stepfather John Silver, Grandfather Bill Thomas, brother Kevin Gelinas and stepdaughter Heather Hill. The memorial service will take place at Osceola Memory Gardens, 1717 Old Boggy Creek Rd., Kissimmee, FL Visitation hours will be from 5-9PM on Thursday May 5, 2022 Internment will take place in Maine at a later date. In lieu of flowers, donations can be made in Michelle's memory to the Lymphoma and Leukemia Society online at givenow.lls.org

Michelle Gelinas Hill passed away unexpectedly on Saturday April 30th at the Osceola Regional Medical Center in Kissimmee, Florida. She was the daughter of Wayne Gelinas and Rebecca (Thorpe) GelinasSilver. She graduated from Scarborough High... View Obituary & Service Information

The family of Michelle Gelinas Hill created this Life Tributes page to make it easy to share your memories.