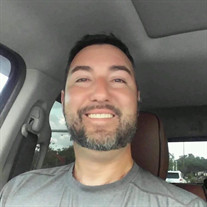 On May 31, 1978 in Ocala, Florida debuted a would be football player named Michael Riley Webb, to parents Riley and Brenda Webb. At least that&#8217;s what the doctor decided based on this linebacker&#8217;s shoulders and coming in at a whopping... View Obituary & Service Information

The family of Michael Riley Webb created this Life Tributes page to make it easy to share your memories.

Send flowers to the Webb family.