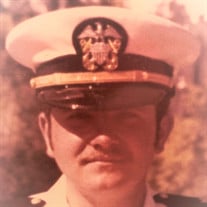 Lieutenant Michael DaBose, 63, passed away peacefully surrounded by family at his Poinciana, Florida home on the 3rd May 2021. Michael was a decorated veteran who served in the Irani refugee rescues and spent 10 years in active duty. Lt. DaBose was born on October 18th 1957 in Philadelphia, PA to his parents Walter and Gail DaBose. When he was just 18, Michael received a full Navy ROTC scholarship and attended the University of Miami in Oxford, Ohio. Michael graduated in 1979 with a Bachelor in Political Science. After serving in Navy, Michael DaBose spent time continuing his work for the military by working as a civilian in Naval Research and Development in various roles. This was while continuing his education at Naval Post Graduate School Monterrey, California, where in 2002 received his PhD. in Computer Science, Software Engineering. After his time with Naval Research and Development, Michael joined the private sector working for distinguished companies such as Raytheon in Tucson, Arizona and Lockheed Martin in Orlando, Florida as Senior Systems Engineer. It was while at Lockheed Martin that Michael, in December 2008 was awarded the SPAWAR SSC San Diego Distinguished Scientist Technology Invention. Michael enjoyed hobbies such as his amateur radio and was an accomplished DIY’er. He was always renovating and upgrading rooms in his home or caring for the family vehicles. Lt. DaBose was an accomplished software engineering doctorate. a loving father, and a brave, honorable sailor. He is survived by his mother Gail, brothers Stephen -w/ wife Ellen and their children and Gerald w/ wife Colleen, his loving wife Imelda, and his daughter Erica, stepdaughter Lisa and family, granddaughters Asia and Sydney. Relatives and in-laws in the P.I. w nieces and nephews. Michael is preceded in death by his father.

Lieutenant Michael DaBose, 63, passed away peacefully surrounded by family at his Poinciana, Florida home on the 3rd May 2021. Michael was a decorated veteran who served in the Irani refugee rescues and spent 10 years in active duty. Lt. DaBose... View Obituary & Service Information

The family of Michael DaBose created this Life Tributes page to make it easy to share your memories.

Send flowers to the DaBose family.