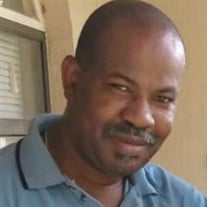 After a short battle with cancer, Luc Charles died on December 27th, 2021, in Kissimmee, Florida at the young age of 50. Luc Charles was born on January 9th, 1971, in Roche-A-Bateau, Cayes, Haiti, to his father Yves Charles, who predeceased him and mother Armelle Mardy. He grew up in a large, loving family with many sisters and brothers. He was known for his sense of humor and his love for the outdoors and coconut water. He went on to become the father to four beautiful children. He migrated to Miami, Florida on October 21st, 2010. Shortly after, he relocated to Kissimmee, Florida where he resided until he sadly passed away on Monday December 27th, 2021. Luc was a loving, caring and hard-working man. He was a people person, who often placed the interest of others before his own. He went out of his way to help those in need. He worked hard to provide his children the necessities of life. For many years, he tenderly played the dual role of father/mother to care for his children. Luc was a hero, a champion, and a role model. Even in death, he will forever be loved and missed, but will never be forgotten. Luc leaves behind his wife Yvette Sinne Charles, his daughters Luneda, Carmelle, and Midory, his son Nicholson’n. His mother Armelle Mardy, his brothers, Frenel Fleurgin, Evinns Fleurgin, Ernest Fleurgin, Arthur Charles, Ygvil Charles, Jean Michel Charles, Eric Charles, Evens Charles. His sisters Anne Marie F. Seide, Darline Jeanis, Charlotte Laveau, Yvica Exant, Yvonne Exant, Yvrose Exant. His nieces and nephews Fenza, Farens, Clark, Guichard, Laurie, Nunca, Karlens, Sean, Fedgine, Franceline, Laura, Roodline, Felicha, Alan, to name a few. His brothers and sisters in law: Francois, Frantz, Rodney, Carol, Dany, Nynon, Luzette. His cousins: The entire Berger family, and Pampan family, and all others who are affected by his death.

After a short battle with cancer, Luc Charles died on December 27th, 2021, in Kissimmee, Florida at the young age of 50. Luc Charles was born on January 9th, 1971, in Roche-A-Bateau, Cayes, Haiti, to his father Yves Charles, who predeceased... View Obituary & Service Information

The family of Luc Charles created this Life Tributes page to make it easy to share your memories.

After a short battle with cancer, Luc Charles died on December...

Send flowers to the Charles family.