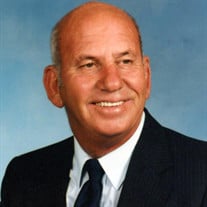 Louie Orville Johnston, 91, of St. Cloud, passed away May 24, 2021 with his family by his side. Born in Charleston, West Virginia, Louie moved to Florida in 1971 from Streetsboro, Ohio where he was maintenance manager of the student union at Kent State University. Upon arriving in St. Cloud, Louie was employed by the City of St. Cloud where he remained until retirement. During his tenure with the city, he worked in the Parks and Recreation Dept., the Sanitation Dept., and ended his career with the city as Docent of Mt. Peace Cemetery. Louie was preceded in death by his wife Harriett Johnston and sister Wilma Lantz. He is survived by his son Roger Johnston (Jean) of St. Cloud; granddaughter Lora Lee Johnston-Kavey (Ray) of Orlando; stepchildren: Teresa Robinson Sullivan (Shawn) of St. Cloud, Chris New (Yvonne) of St. Cloud and five step grandchildren: Patrick Robinson (Meghan) of McDonough, Georgia, Joshua Sullivan of Kansas, Emily Sullivan of St. Cloud, Kristy Corra (Jesse) of Orlando, Jackie New of Orlando and his sisters: Beatrice Pizzute of Kent, Ohio and Yvonne White of Streetsboro, Ohio. Louie is also survived by two step great grandchildren as well as five nieces and two nephews, including his very special niece Bonny Hull (Dave) of St. Cloud who took care of Louie in his later years. Louie enjoyed many things in life such as reading, traveling, talking, spending time with family and friends, but his very favorite activity was mowing yards. He could often be seen on his Dixie Chopper mowing yards for many of his neighbors. A graveside service will be held on June 19, 2021 at 10:00 a.m. at Mt. Peace Cemetery in St. Cloud. Arrangements under the direction of Osceola Memory Gardens Funeral Home, St. Cloud, FL, www.OsceolaMemGds.com

Louie Orville Johnston, 91, of St. Cloud, passed away May 24, 2021 with his family by his side. Born in Charleston, West Virginia, Louie moved to Florida in 1971 from Streetsboro, Ohio where he was maintenance manager of the student union at... View Obituary & Service Information

The family of Louie Orville Johnston created this Life Tributes page to make it easy to share your memories.

Send flowers to the Johnston family.