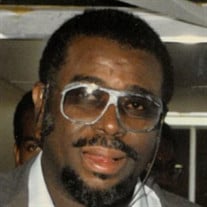 Friends, families love ones, we are here today to pay tribute to an individual that is considered a hero to many. Knowing that this day would come does not make it any easier for any of us. I have written eulogies for several family members who had passed on and never had any issues with finding the right words to express what I need to say. But this time the words are not coming freely. How do you find the right word for a person who in his own way have touch so many lives in so many ways. And so today I stand here to celebrate his life, for his life is what speaks to us and not his death. His love and care for his family and friends was his own reason for living. Linburgh Emanuel Anderson, known to most as “Andy” and to his family as “Curly” passed away on January 8th 2022, this was just eight days shy of his 77th birthday. If you do the math, you will see that he was born on January 16, 1945 in in a small district name Grantham, in the parish of Clarendon in the island of Jamaica. He was the fourth child and third son for Levi and Evelyn Anderson. 1945 was a very difficult year for most of the world and Jamaica was no exception. Some of you might recall that this was a year before the Second World War ended. Things were very tough then but his parents were able to somehow provide for him and the rest of the family during a very difficult period. As soon as he got to school age, he was sent to the Kilsyth All Age school where he excelled in all subjects. Because of his extensive knowledge, he was often asked to tutor students who had learning issues or as we say today “learning disabilities”. He later took advance schooling in what was then known as first, second and third level education. After school there was not much opportunity for growth for him in the community so he left home and went to live with his older brother in the town of May Pen. There he started leaning carpentry, but he quickly realized that carpentry was not what he wanted to do. So, in 1964 he enlisted and joined the Jamaica Defense Force army. He loved the life of a solder and after leaving he would often talk about the adventures he encountered along the way. He spent 6 years in the army and during his time he received many awards and accolades. In 1968 he met Marjorie Edwards who was then living in the USA. They fell for each other and after a short courtship, they were married in August 1969. So, August 2022 they would have celebrated 51 years together. In 1970 he migrated to the USA to join his wife and settled down in Miami. After working in a few different jobs, he final settled on working for the city of Bay Harbor on Miami Beach. He worked there for many years before he decided to start his own business as an independent trucker. Life is Miami was a blast. There, he started his family with the birth of his daughter. Other siblings and in-laws also joined him and his wife in Miami. He had many friends in Miami and his home was a central meeting place for all of them. They would often stop by after work or on weekends to have a drink, listen to music or just to chat. He would always provide food and entertainment for anyone that came by. He made sure that no one ever left his house hungry. In 2002 he decided to move his family to Poinciana Florida. There he continued his trucking business but later gave up the business to work for Prince a highway construction company. He worked there for several years until he retired in 2017. He left behind, son Tommy, daughters Tamra and Suzetta, sister Bibs, brothers Dancel, Lascel, Curnal, Eggy and I. He also had many nephews, nieces, cousins, other relatives and many many friends. Today as I stand before you as the representative of his family, I want us to celebrate his life. So let us give thanks for the many years he spent with us, for all the great things he did for many of us and for making this world a better place for a lot of us. This is not goodbye Andy, but sleep on Andy. We will meet again on the great resurrection morning In closing, I would like to read a message from his daughter Tamra. She wrote it on Facebook a few minutes after her dad died My Father, Lindbergh Emanuel Anderson Has Indeed Left This World and Has Gone Home To Be With The Lord and With Those That Had Gone Before Us. I Will Miss Him Very Much Everyday. But I Know Where He Is and He Not In Any Pain Whatsoever Anymore. I Know I Will See Him Again. You Are Home Now Dad, So Take Care and Do Not Worry About Me. I Will Be Fine and Be Really Strong and God Will Take Care of Me From Here On Out. God Bless You, Dad and Let God Be With You, Always, For Good and Forever.

Friends, families love ones, we are here today to pay tribute to an individual that is considered a hero to many. Knowing that this day would come does not make it any easier for any of us. I have written eulogies for several family members... View Obituary & Service Information

The family of Linburgh Emanuel Anderson created this Life Tributes page to make it easy to share your memories.

Friends, families love ones, we are here today to pay tribute...