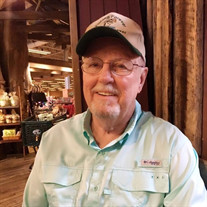 "Les was born in 1941, a native of Iowa, who came to Florida with his family in 1985. He was a man with many talents. From woodworking to his ability to fix just about anything, he was never afraid to try something new. He served his country, going to Korea and was a proud Army Ranger. When anyone in the family was facing a challenge, his encouragement was always "Ranger up! You can do it!" He was a man whose compassion for others was heartfelt. He never hesitated to offer his help to anyone. He often helped a neighbor or someone from the church needing something he could provide. He was generous with both his time and money. Through the years his work life was diverse. He spent several years in food production management. He was blessed to own his own Christian bookstore. He would tell you that during that time God grew him spiritually in ways he was forever thankful for. He was known in poinciana as "The Guy" to talk to at Poinciana Hardware, and lastly, in retirement he sold real estate. He was a talker who loved people. He had four daughters he loved with all his heart. He was known to them as Papa Bear. He was so proud of each of them and knew he was blessed as a father. He was an avid bass fisherman with many fish tales. He was also a man obsessed with his shih-tzu Leroy, who was his faithful companion named after him. Leroy is sadly missing him. Les used to tell Leroy, "You'd better not go before me because I can't make it without you!" His wife Terry would be the first to tell you how much he loved her and his daughters. God blessed them beyond measure in their 43 plus years together. He will be greatly missed by all, but we look forward to our heavenly reunion. Les is survived by his wife Terry, his daughters Amy, Andrea, Mandy and Samantha, and his brother Scott."

"Les was born in 1941, a native of Iowa, who came to Florida with his family in 1985. He was a man with many talents. From woodworking to his ability to fix just about anything, he was never afraid to try something new. He served his country,... View Obituary & Service Information

The family of Leslie Leroy Jenkins created this Life Tributes page to make it easy to share your memories.

Send flowers to the Jenkins family.