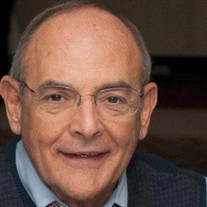 On Thursday, August 19, 2021, Deacon Larry (Lawrence) Migliorato, of Davenport, Florida, passed away at the age of 68. A mass in remembrance of Larry’s life will be held at Corpus Christi Catholic Church, 1050 Celebration Ave, Celebration, Florida, on Friday, September 10, 2021 at 11:00 a.m. The mass will be live-streamed at CorpusChristi.church. Click on Live-Stream. For further information, go to www.OsceolaMemGds.com. He was born on November 30th in Pittsburgh, Pennsylvania. Larry served in the U.S. Army from 1971 through 1973 and achieved a Master of Arts in 2009. He was ordained a Deacon in the Catholic Church in Joliet, Illinois on August 22, 2009, serving in the Orlando diocese since October 2016. He was also a member of the Knights of Columbus. Service to our Lord and those in need was always his main focus in life. He enjoyed music, playing the guitar, and had a beautiful voice. A large collection of First Edition leather books was his passion. On July 27, 1974, Larry married Sharon Guzniczak. He is survived by his wife, his daughter Amanda Brown (Mike), son David (Astrid), granddaughter Hayley Brown, and his brother Steve (Judy). He was proceeded in death by his parents Otalio and Anna, his brother Michael, and his in-laws Vincent and Josephine.

On Thursday, August 19, 2021, Deacon Larry (Lawrence) Migliorato, of Davenport, Florida, passed away at the age of 68. A mass in remembrance of Larry&#8217;s life will be held at Corpus Christi Catholic Church, 1050 Celebration Ave, Celebration,... View Obituary & Service Information

The family of Lawrence Anthony Migliorato created this Life Tributes page to make it easy to share your memories.

Send flowers to the Migliorato family.