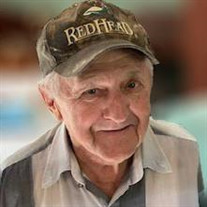 On March 3, 2021 Larry Barkley passed away unexpectedly in his Florida winter home. He will greatly missed by all who knew him. Larry worked in construction his whole life and was a highly skilled operator until he passed. He was an avid hunter and never went year without harvesting a deer with antlers which anyone who knows him can attest to this by viewing his garage at his home in Bristol New York. He was an avid fisherman and never missed an opportunity to be “gone fishing”. He took up golf later in life after many years of indicating that we would “never catch him chasing a little ball around” and truly excelled at the sport and spending time with his many friends. Larry was a very good poker player to the point that many would not want to sit against him, but when he played Euchre everyone wanted to be his partner. Larry was a happy, friendly people person, always spending time lending a hand to his many, many friends. He was always there to lend a hand no matter when the call came in and never said no. Larry is survived by his wife Barbara of 59 years. He is also survived by his daughter Lorie Barkley-Semmel and her spouse Christopher, son Paul Barkley and his spouse Karla. Deceased by son Larry Barkley. Survived by his grandchildren: Marisa Barkley and her fiancée James Cubiotti, Mason Semmel, Austin Barkley, Conner Barkley, Parker Semmel, Easton Semmel and step grandchildren: Alisha Moss, Todd Doing and spouse Janell and Dillon Burrage. Survived by great-grandchildren: Breighleynn and Emerie Cubiotti. Step great-grandchildren: Rowan Doing, Reighleynn Moss, Michael Homer, Jr. Larry is survived by his brothers: William Barkley and spouse Sandy, Stanley Barkley, sisters: Marilyn Davenport and spouse Norman, Clara James and spouse Charles, Carolyn Davis and spouse Dale. There are many more nieces, nephews and cousins. A visitation will be held on Saturday March 6, 2021 from 2 to 5pm at the Osceola Memory Gardens Funeral Home 2000 13th Street St. Cloud, FL There will be a celebration of life later in the spring in New York State.

On March 3, 2021 Larry Barkley passed away unexpectedly in his Florida winter home. He will greatly missed by all who knew him. Larry worked in construction his whole life and was a highly skilled operator until he passed. He was an avid... View Obituary & Service Information

The family of Larry George Barkley created this Life Tributes page to make it easy to share your memories.

On March 3, 2021 Larry Barkley passed away unexpectedly in his...

Send flowers to the Barkley family.