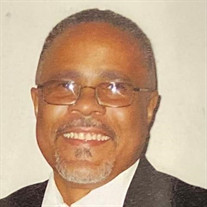 Keith Hickman Brooks went to be with his Lord and Savior on January 10, 2022. Keith attended church every Sunday and he served as an usher at City of Life for many years. Serving the Lord brought him immense honor and joy. He loved Jesus with... View Obituary & Service Information

The family of Keith H Brooks created this Life Tributes page to make it easy to share your memories.

Keith Hickman Brooks went to be with his Lord and Savior on January...

Send flowers to the Brooks family.