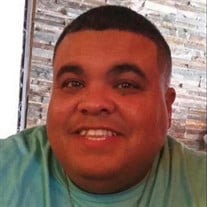 Jose Louis Serrano also known as Louie, 52, Left us on September 13, 2021, in Orlando Florida. Jose Louis Serrano was born on July 4, 1969 in The Bronx, New York to Jose Luis Serrano and Raquel Serrano. He lived in New York till the age of 8 years old till he moved and grew up in Tampa Florida till the age of 18. In his professional life he was a horticulturist for 20 plus years and was a Production Manager at Bight View at the time of his passing. He was a mighty man of God that would always preach God's word and lived it everyday with his actions. Anyone that knew him couldn’t help but smile with how joyful he was and his joking around. Jose’s Interests include his family, football, all kinds of music, dancing, anything that praises the name of the lord, going to church, bible studies, food, and playing jokes on others. Jose Louis Serrano is survived by his wife Janice Serrano, his children Daniel Albert Diaz(Alby), Jelina Josette Serrano, Zoe Victoria Serrano, grandchildren on behalf of Daniel Albert Diaz(Alby), Joshua Miguel Alvarez, Renesmee Bethsaida Diaz, and Gianni Louie Diaz and his parents Jose Luis Serrano and Raquel Serrano. He is also survived by his brother Steven Serrano, spouse and his children Steven, Mya, Gaby, Paris, Elijah, London, brother John Anthony Serrano, and his sister Yocylyn Betty Serrano, spouse and her children Amaya, and Aaliyah. Jose's tremendous Godly legacy will live on forever! Favorite bible verse: But seek first the kingdom of God and all his righteousness, and all these things shall be added to you. Mathew 6:33 NKJV

The family of Jose Louis Serrano created this Life Tributes page to make it easy to share your memories.

Send flowers to the Serrano family.