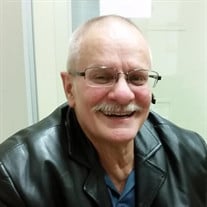 Jose Joseph Rivera entered the gates of heavens on May 6, 2022. In the 72 years that God allowed him to walk this earth, he left his mark on everyone he met. Jose Joseph Rivera was born on October 29, 1949, in New York, NY, and although he was an only child, he had many brothers at Mount Loretto. Jose’s love for working with his hands led him to dedicate 29 years of his life as a carpenter at Bronx Lebanon Hospital in New York City, where he was known and loved by many employees. He was a straight shooter who never minced words, a stubborn man who once put his foot down, there was no hope of changing his mind. He was curt and rough around the edges but for those who truly knew Jose, under all that facade was a loving, generous, caring, dependable man who loved God and his family. He had a work ethic that was immeasurable and took pride in his accomplishments. Jose wore many titles throughout his life, but the ones he cherished the most were being a father, grandfather, and husband to the love of his life, Migdalia. For 42 years, they honored every vow and filled each other’s lives with patience, gentleness, passion, and humility. Their love became more profound, and their struggles became each other’s strengths. With every passing day, the continuous nurturing of their marriage reflected God's limitless blessings upon their lives. Throughout those years together, they formed something beautiful to love and admire, and their faith in the Lord continuously sustained them. Jose was a man of faith who loved the Lord wholeheartedly. No matter the difficult circumstance he faced in life, his faith in God never wilted nor wavered. We will feel the void of his death for quite some time, but the memories of his life will comfort our hearts. We will miss everything about him. We will miss his snow-white hair covered in sawdust, his emerald eyes that were hard to forget, and his smile peeking through his soft goatee. We’ll miss the sound his feet made as they shuffled through the house, his rambunctious laughter that would fill a room, and his infectious sense of humor, but most importantly, we’ll miss the sound of his voice saying, “I love you.” So as we gather on Saturday to mourn his passing and as our eyes fill with tears and our hearts with sadness, may they also be filled with joyous moments of his life we were able to share with him. This is not "goodbye"; it's "see you later," for we know we will see him again in heaven. We were blessed to have an amazing man to call "Papi." We love and will cherish you forever. We will honor the man you were and celebrate your life. Jose is survived by his wife Migdalia, his sons Orlando and Marcus; his daughters Jadis and Darlene; and his nine grandchildren: Jessica, Brianna, Jada Lee, Madison, Mason, Olivia, Ava Rose, Adam, and Mark Brandon. In lieu of flowers, contributions for a Memorial would be appreciated.

Jose Joseph Rivera entered the gates of heavens on May 6, 2022. In the 72 years that God allowed him to walk this earth, he left his mark on everyone he met. Jose Joseph Rivera was born on October 29, 1949, in New York, NY, and although he was... View Obituary & Service Information

The family of Jose J Rivera created this Life Tributes page to make it easy to share your memories.

Send flowers to the Rivera family.