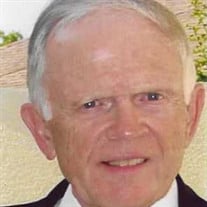 Jerry Thomas Robbins, 89, of Poinciana, FL passed away August 8, 2021. He was born in Battle Creek, Michigan to Virginia and Thomas Robbins (deceased), graduated from Battle Creek Central High School in 1950 and received his Bachelor or Arts degree in journalism from Michigan State University in 1957. He held a clerical position with the Federal Bureau of Investigation in Washington D.C. for six months before enlisting in the U.S. Air Force in 1950. He was honorably discharged in 1953. Jerry worked at the Midland (Michigan) Daily News as sports editor and telegraph editor from 1957-64, then became telegraph editor and city editor of the Pontiac Press. General Motors Pontiac Division hired him in public relations where he worked for three years (1969-72) and then transferred to Oldsmobile public relations in Lansing (Michigan). He was promoted as the General Motors public relations Cleveland (Ohio) regional manager, a job he held from 1978-81 and then transferred to the company’s Detroit headquarters for two years before being appointed as regional manager to the Dayton (Ohio) office (1983-87). Jerry was GM’s Chicago regional manager before ending his career as resident director responsible for GM’s Epcot operations at Walt Disney World in Florida. He retired in 1992. His corporate responsibilities included serving as primary corporate spokesman in each regional location, working closely with media, community leaders and top GM executives. He represented GM in community activities while serving on numerous boards and committees including the National Aviation Hall of Fame Board of Directors in Dayton (Ohio), the Salvation Army local board chairman in Lansing and chaired and was master of ceremonies of the Lansing Chamber of Commerce annual meeting bringing in celebrity speakers such as Erma Bombeck and Charles Kuralt. In retirement he was founding president of the GM Retirees’ Club of Citrus County, president of the Sugarmill Woods Homeowner Association (Homosassa, FL), member of the first class of the Citrus County Sheriff’s Citizens’ Academy and a 10-year Citrus County Sheriff’s Office volunteer until moving to Solivita in Poinciana, FL in 2005. Everyone spoke of his beautiful smile, upbeat attitude and wonderful sense of humor all the time until he passed. He was greatly loved and returned it a hundredfold. His special interests include his family, domestic and international travel, photography and working with stained glass making Tiffany style lampshades. He was founder and editor of the Solivita Travel Club newsletter On the Go from 2006 until the present, enjoyed playing bridge, watching college football and basketball (especially Michigan State teams-GO GREEN!) plus professional baseball and football. He was a member of First Presbyterian Church in Haines City, FL. Jerry will be greatly missed and survived by his wife of 64 years, Nancy; his daughters Tracie (Jim) Carlson, of Hailey, ID and Teri (Nevio) Koroman, of Cincinnati, Ohio; his grandchildren Nate and Noah Koroman, Cody Swenke and Alyssa Carlson; and his sister Suzanne Hoopingarner of Kalamazoo, MI. In lieu of flowers, donations can be made in Jerry’s name to the American Cancer Society or First Presbyterian Church Haines City.

Jerry Thomas Robbins, 89, of Poinciana, FL passed away August 8, 2021. He was born in Battle Creek, Michigan to Virginia and Thomas Robbins (deceased), graduated from Battle Creek Central High School in 1950 and received his Bachelor or Arts... View Obituary & Service Information

The family of Jerry Thomas Robbins created this Life Tributes page to make it easy to share your memories.

Send flowers to the Robbins family.