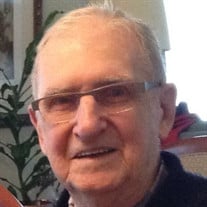 Rev. James Woehr James Woehr, age 99, passed from earth into eternity on February 6, 2022 in Kissimmee, Florida. He was married to Jean C. Turner who, after 53 years of marriage, passed in 2003. He was born in Philadelphia, Pennsylvania, the son of Albert and Emilie Woehr. He served in the army during WW II. Then, after graduating from the Missionary Training Institute (now Nyack College) in 1950, he entered the ministry as pastor of a small congregation just outside of Allentown, Pennsylvania. In 1952 James and Jean traveled to Chile where they served as missionaries with the Christian and Missionary Alliance for 35 years. After returning to the US, they joined the staff of the Spanish Alliance Church in Queens, where they participated actively for many more years. Pastor James was committed to communicating the Good News of Salvation in Christ Jesus. He worked in both city and rural settings, at a time when travel could be long and difficult. Whether horses, ferries, buses, trains, or cars he was often moving from town to town to encourage, teach and help others and share his faith with them. He will be remembered for his hard work, easy humor, and generosity. He was a loving father, grandfather, and great-grandfather. He leaves behind: six children (and their spouses), eleven grandchildren, and three great-grandchildren, all of whom he prayed for daily, by name. He will be buried next to his wife in New York. A memorial service will be held at 1:00 pm on Sunday, March 13, 2022 in the Evangelical Community Church, 1155 Newfield Ave., Stamford, Connecticut 06905. In lieu of flowers, a memorial donation may be made to one of two organizations which were dear to his heart: The Christian and Missionary Alliance (Great Commission Fund), https://secure.cmalliance.org/give/ 8595 Explorer Drive, Colorado Springs, CO 80920 The New York City Rescue Mission, Canal Street Station, P.O. Box 275, New York, NY 10013-0275

Rev. James Woehr James Woehr, age 99, passed from earth into eternity on February 6, 2022 in Kissimmee, Florida. He was married to Jean C. Turner who, after 53 years of marriage, passed in 2003. He was born in Philadelphia, Pennsylvania, the... View Obituary & Service Information

The family of James Woehr created this Life Tributes page to make it easy to share your memories.

Send flowers to the Woehr family.