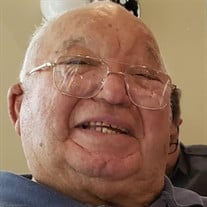 Ismael Rodriguez-Laboy, 91, went back to Heaven on February 1st, 2022, in Kissimmee, Fl. Husband of Teresa Rodriguez, they shared 23 yrs of marriage. Born in Patillas, Puerto Rico, he was the son of late Eduardo Rodriguez, and late Felicita Laboy. He was a Korean War Veteran serving with the ARMY where he was in charge of a crew at the Ammunition Depot in Korea. After 4 years of service, he left the ARMY and began working with CONRAIL Railroad, where he was assigned to Maintenance of Way and eventually crew supervisor in charge of the maintenance of Way truck. He retired from the railroad on 1992. He was formerly a resident of Bethlehem, PA where he resided for 66 years, after which he moved to Kissimmee Fl and had been here for almost 4 years. Active member of St. Rose of Lima Catholic Church, Pleasant Hill Poinciana for the last 3 yrs. Prior he was an active member and volunteer of Holy Infancy Catholic Church in Bethlehem, PA. On 1952 he joined other fellow friends and neighbors as a cofounder Of the Puerto Rican Beneficial Association and Puerto Rican Club in Bethlehem, PA. For over 15 yrs was an active member and volunteer at the Hispanic Senior Center, where he was known as a champion in the Puerto Rican Dominoes Game. He was also the recipient of a Presidential Certificate for his participation on the Korean War, as well as Congressional and State Representative’s Certificate for his community volunteer work. On 1965 he joined other family members to help establishing the first HOGAR CREA for males in Bethlehem, where he served on the first Steering Committee composed by 7 members. As a veteran, he also is a member of the American Legion. He is survived by his wife, Teresa Rodriguez; daughter, Lizette and husband Fred Sparks, of Ft. Meyers, Fl; son Ismael Jr, of Bethlehem, PA; son Jamie and his wife Eunice Rodriguez, of Maryland; step children Blanca and Jose Torres; 7 grandchildren; 11 greatgrandchildren; one greatgreatgrandaughter; 7 sisters, and many many caring and loving nieces and nephews, which will miss him dearly, his laughs and above all his free farming spirit. He was predeceased by his parents and his brother. Memorial donations/in lieu of flowers, family will deeply appreciate monetary donations.

Ismael Rodriguez-Laboy, 91, went back to Heaven on February 1st, 2022, in Kissimmee, Fl. Husband of Teresa Rodriguez, they shared 23 yrs of marriage. Born in Patillas, Puerto Rico, he was the son of late Eduardo Rodriguez, and late Felicita... View Obituary & Service Information

The family of Ismael Rodriguez-Laboy created this Life Tributes page to make it easy to share your memories.

Ismael Rodriguez-Laboy, 91, went back to Heaven on February 1st,...

Send flowers to the Rodriguez-Laboy family.