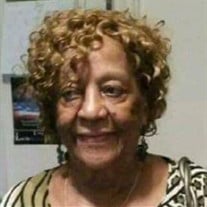 Hyacinth Mahayla Nevers Hyacinth Mahayla Nevers was born in Kingston, Jamaica on April 1, 1932 to the late James Wilson and Irene Fraser. Cynthia, as she was known by her family and friends, led a full life prior to her passing on March 4, 2021 in Kissimmee, Florida, USA. Cynthia was married to Lloyd George O’Connor as a teenager in Kingston, Jamaica where she gave birth to her first son Eldon “Ricky” in December 1951 and her second son, Cornel Percival “Trevor” in June 1953. Cynthia, Ricky, and Trevor emigrated to England in 1957 to join George who had emigrated a year earlier. In England, the family grew when Derek was born in February 1958, Patrick in February 1965, Michelle in July 1966 and Nicole in January 1977. The family eventually moved to 4 Grange Park Road in Thornton Heath, England. While in England, Cynthia had many jobs, her favourite being at Nigeria Airways in London as it allowed her to travel, something she loved to do. Cynthia emigrated to America in March 1979 with Michelle and Nicole, Patrick joined a month later. She worked as a Home Health Aide for most of the time that she lived in Brooklyn. While living in Brooklyn, Cynthia lived on Lenox Road and became a well-known and popular member of that street’s community for over 30 years. Cynthia and George divorced after 30 years of marriage; in 1994, she married Everton Nevers and remained married to him until her passing. After living in Brooklyn for 40 years, Cynthia moved to Decatur, Georgia in 2019 and then to Kissimmee, Florida in 2020. Anyone who knew Cynthia knew that she loved the warm weather, so a move down south to Georgia and Florida was not a surprise. In England or the US, her door was always open to family and friends. She always gave shelter to those who needed a place to stay and was a great hostess who loved to cook and to hear music being played throughout her home. Both her laugh and smile were infectious and could light up the room. Although, at times, she was far away from some of her grandchildren and great-grandchildren in England and in the United States, she was very proud of all of their amazing accomplishments and took the time to visit or call them as much as she could especially for graduations, birthdays, holidays and weddings. During the last months of her life, Cynthia’s health began to fail and she passed away in the early morning of March 4, 2021. Cynthia was predeceased by her siblings Ena, Dorothy, David, Enos, and Joseph and Lera as well as her first grandchild Kelvin. She is survived by her children Ricky, Trevor, Derek, Patrick, Michelle and Nicole, grandchildren Michael, Alison, Samantha, Jermaine, Ricardo, Shereen, Louise, Sabrina, Michael, Eric, Kanica, Michael, Xavier, Gianni, Kamilah, Akeem, Emanuel, Amari, Daniel, Justin, Jerome and Aisha as well as numerous great-grandchildren. She is also survived by many nieces and nephews and other family members in England, Jamaica, Canada and the United States. She will be greatly missed by many friends and family.

The family of Hyacinth M. Nevers created this Life Tributes page to make it easy to share your memories.

Hyacinth Mahayla Nevers was born in...

Send flowers to the Nevers family.