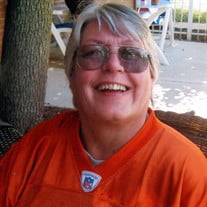 Holly B. (Rupcich) McHale, 66, of St. Cloud, FL, passed away peacefully at home on Saturday, July 24, 2021. She was the daughter of the late William and June Rupcich and wife of the late Patrick D. McHale of Whiting, IN. Holly was born on January 14, 1955, on the South Side of Chicago. She graduated from St. Francis de Sales High School in 1972 and received her bachelor’s degree in Elementary Education and Special Education from Quincy College in 1976. In college she participated on the collegiate level on the softball, basketball, and field hockey teams. She was voted the best defensive player on the 1975-76 field hockey team and played against the Russian Women’s Olympic team in an exhibition game at Quincy College in 1976. Holly, her sister Dawn, and other team members on the Fanning’s Tap softball team from Blue Island, IL, were inducted into the 16” National Women’s Softball Hall of Fame in 2009. She also participated in neighborhood flag football, and various 12” and 16” softball teams during the summer and fall each year in the 1970’s and 1980’s. She was an avid sports enthusiast, particularly a huge fan of the Chicago Bears and Chicago Cubs. In more recent years, she became a “permanent fixture” at the Canoe Creek Sports Tavern (The Tavern) in St. Cloud, FL, cheering for her beloved teams in her favorite seat at the bar that no one would dare sit in when the Bears or Cubs were playing. After college she worked at the family restaurant, Rupcich Restaurant, until she was hired in her first teaching position as an assistant teacher in Markham, IL. In 1977 she started as a full-time teacher at Annunciata grade school on the Southeast Side of Chicago. Her brother Steve had the honor of having her as his math teacher for 2 full years at Annunciata, where she “told” him he could not call her Holly and “must” refer to her as Ms. Rupcich when at school! She taught at Annunciata for 25 years, then left in 2003 to move to St. Cloud, FL, with her husband, Patrick McHale, who had retired from Lever Brothers in Whiting, IN, in 2003. Holly initially thought that she too was fully retired, along with Patrick, when they first moved to St. Cloud. After one year, she decided that she was too young to retire and returned to education teaching at Arthur J. Gallagher Neighborhood (Charter) School, Neptune Middle School, Harmony Community School, and most recently at St. Cloud High School, where she retired from in 2019. This was an especially difficult decision for her, since she was leaving the profession, she greatly loved and had impacted so many lives of those she taught during her exemplary career. Survivors include Bonnie (Gary) Nakashian of Pinehurst, NC, Robert (Patricia) Rupcich of Waco, TX, Dawn Rupcich (Nancy Rodgers) of St. John, IN, Steven Rupcich of Denver, CO, her companion, Susan Luke of St. Cloud, FL, her daughter-in-law Carolyn McHale and grandchildren Alex and Kyle, as well as many aunts, uncles, cousins, nieces, nephews, great nieces and nephews who have been touched by her caring ways. Visitation will be held on Friday, July 30, from 4:00 to 8:00 pm at Osceola Memorial Gardens Funeral Home in St. Cloud, FL. Funeral Services will be held on Saturday, July 31, at 10:00 am at the St. Thomas Aquinas Catholic Church in St. Cloud, FL. Holly touched so many lives in a loving and positive way. She will live in the hearts of her family and friends forever. She will be greatly missed by all of her Kiddos! If considering floral arrangements, St. Cloud Florist, 2018 13th Street, St. Cloud FL, is highly recommended (telephone 407-892-4443/website www.stcloudflorist.com). In lieu of flowers, donations can be made in Memory of Holly B. McHale to the Osceola County School system as follows: Donate Now (foundationosceola.org)

Holly B. (Rupcich) McHale, 66, of St. Cloud, FL, passed away peacefully at home on Saturday, July 24, 2021. She was the daughter of the late William and June Rupcich and wife of the late Patrick D. McHale of Whiting, IN. Holly was born on... View Obituary & Service Information

The family of Holly B McHale created this Life Tributes page to make it easy to share your memories.

Send flowers to the McHale family.