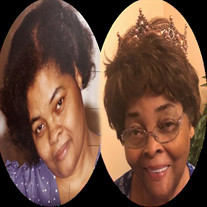 Ma Mommie Gram Grams Miss Jervis Miss Glennis Sister Jervis Miss Ebanks Aunt Glenn Sister Glennis Sister Ebanks Aunt Glennis These were all the names my Mom went by, but the most important names were Mother and Christian. Yes, that’s right, my Mom was old school. You address her by some type of salutation, and if you called her Glennis, she’d tell you off and correct you. Even my Aunt Annie from Roatan called her miss Glennis, and she might actually be the same age as my Mom if not older, but most of all, she was a Christian, and loved God. She read the entire Bible at least three times and always watched 3ABN, Doug Batchelor, Walter Veith and other Seventh Day Adventist ministers. She loved people that didn’t love her back and loved people who didn’t want to talk to her, and she also loved those that took her for granted, and loved those who used her, and never gave up on her children. She also found a way to send money to her relatives in Honduras when she was broke herself, and if that isn’t what a Christian is, I don’t know what is. My Mom was born in Roatan, Honduras on January 15th, 1940. She was married to Gerald Ebanks for 17 years, and worked as a home health aide at UCP on Staten Island for around 20 years. My mom had a hard life. She had to drop out of school at an early age to help her father Alfred Jervis with his boat building business, and after that, she cared for her dying mother before moving to New York City with her young son Philbert. My mother was a person of principal, and always avoided situations in which she would look like a hypocrite; which is one of the reasons why she didn’t go to church after she got divorced from her husband many years ago. But she made sure that her children went to church every Sabbath while my siblings and I were kids. There were some times that were very hard, and she at times was very miserable, but she always trusted in the Lord. Despite growing up poor, my Mom was a great cook. I remember when she visited my husband and I in Spring Hill, I gave her something to eat, and she yelled, “This cooking tastes like white people food” and I said yes ma, you’re right because I bought it from Publix. Even though she complained a lot, she also told us to count our blessings and name them one by one. That is one thing that both my mom and dad had in common. It was faith and trust in the Lord. Even though my parents were divorced for a very long time, my Mom told me of how my Dad would pay tithes no matter how broke he was, and my Mother also did the same. Even though this was not her favorite Bible verse, she kept talking about casting your bread upon the waters, which I believe touches on faith and generosity. Faith and generosity were the two things that my Mom lived by. Sometimes when we would talk about our health and those who had already passed away, whether they were relatives or church family, she would recall what her mother said and it was “Something’s going to kill me anyway” and I would say Ma, please stop saying that. It doesn’t make any sense and it’s redundant. I told her we all know that we’re going to die, but at least my Mom died in her sleep, and I hope it was peaceful. My mom died on Father’s Day which I find to be so ironic because she was a single mother of six children and raised all of us by herself and now some of us have children and grandchildren of our own. My mom worried a lot. She worried about everything, but now her worries are no more and she is finally at rest. She doesn’t have to worry about the mortgage and now she can rest in the promise that Jesus prepared a place for us. She doesn’t have to worry about a sinkhole because where my mom is going has twelve foundations of different gemstones. My mom died at home in a community that wasn’t gated, but the community where she is going will have gates made of pearls. My mom was also worried about a cracked driveway, but the driveway she will be walking on will be made of pure gold. I am glad that my mom is free from her worries and burdens and her disappointments and her frustrations, and instead of shouting at me, Lue, Zena, Dwight, Philbert, Carol, ChiAnna, David, Shaina, Jeidga, Junior, Sam, Jonathan, and maybe Tami and Alvin as well, the shout will come from Jesus as he descends from heaven to redeem his righteous where those like Mommy who are dead in Christ shall rise first to meet him in the air, and according to 1 Thessalonians Chapter 4:18, we are to comfort one another with these words. My mom is survived by her oldest child, Philbert Harley Ebanks, and then Jason Ebanks, Dwight Kenneth Ebanks, Luella Sharon LaRoche and her husband David LaRoche Sr., Pamela Glennis Ward and her husband Sanford Ward, Zena Rosana Ebanks, Alvin Jervis and his wife Tami Rowe Jervis; siblings, Dorothy Jervis Webster, Linton Jervis, Theodore Jervis and Samuel Hurstle Jervis; grandchildren, Maurice Jay Ebanks, Janiece May Ebanks, Izaiah Harley Ebanks and his wife Ellashia, Jeidga Cherie Ebanks, ChiAnna May LaRoche, David LaRoche Jr., Samuel Hernando Ebanks, Jonathan Epharim LaRoche, Shaina Anne LaRoche, Blessing Darcel Jackson, Darion Kamiel Jackson, Adam Manuel Jervis, Jacob Alexander Jervis, Noah Edward Jervis, Kasheia Plair, and Rhea Richardson; great grandchildren, Diamond Alexis Ebanks, Jayden Maurice Ebanks, Khaliyah Faith, Ebanks, Marlon Randall Moise, Zehneth Harley Ebanks, Lauryn Alissa Moise; along with a large host of nephews and nieces from her generation to today’s generation.

The family of Glennis May Jervis created this Life Tributes page to make it easy to share your memories.

Send flowers to the Jervis family.