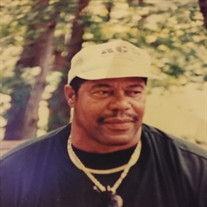 Ernest Wilfred Wyatt “Rumpel”, age 85, of Kissimmee, Florida was called home on Saturday, January 1, 2022. He transitioned peacefully, with the comfort and love of his family by his side. Ernest was born on December 29, 1936 in St. Kitts, a Caribbean Island in the West Indies to the late Agatha Wyatt and Jamie Pemberton. Ernest lived with his daughter, Vernor Tull and her husband, McDonald Tull in his final years. Ernest Wyatt was employed at Incinerator Authority of Jersey City, New Jersey. After retiring, he worked for the Board of Education in Jersey City as a Server. While Ernest lived in Florida, he found a few things he enjoyed, such as taking long rides with his aide Diane, going to the Lakeside Park, playing dominos, watching his LMN movies, working out, going to Church and last but not least, listening to his calypso music and dancing. His memories will be cherished by his loving family; children, Vernor Tull, Shirmel Wyatt, Sharon Wyatt-Chisolm, and Ernest Alfred Wyatt, Jr.; nephew/son, James Whyatt; sisters, Violet and Verna; son-in-law’s, McDonald Tull and Tim Chisolm; grandson-in-law, Juan Lopez; grandchildren, Suann Lopez, Patricia Tull, Jessica Tull, Troy Wyatt, Trey Reaves, Trezure Reaves, Jacore Wyatt, and Timya Chisolm; niece, Kim Whyatt, great nephew, Stephon Whyatt, great nieces, Jade Whyatt, Courtney Haynes; and twelve great grandchildren. Ernest will also be missed by his very dear friend/brother, William. Ernest was loved by many and will be truly missed.

Ernest Wilfred Wyatt &#8220;Rumpel&#8221;, age 85, of Kissimmee, Florida was called home on Saturday, January 1, 2022. He transitioned peacefully, with the comfort and love of his family by his side. Ernest was born on December 29, 1936 in... View Obituary & Service Information

The family of Ernest Wilfred Wyatt created this Life Tributes page to make it easy to share your memories.

Send flowers to the Wyatt family.