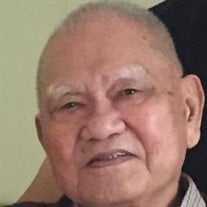 On July 7, 2021, two weeks short of his 94th birthday, Emiterio “Terry” Reyes Jr. went to meet the Lord whom he had faithfully served for most of his life. Terry, as he was known by family and friends, was born in Cavite City, Philippines on July 22, 1927, the only son of Amanda & Emiterio Sr. and brother to younger sisters Iluminada, Ruth, Josephine (Hildo) Cordenillo, and Raquel (Don) Major . After obtaining a BA in Business from the University of the East, he studied at Manila Bible Seminary where he met his future wife, Gloria (Pel). They were married in February 1949 and were blessed with three children - Elizabeth (Randy) Erwin, Joel (Beth), and Elizur (Ruth). They were also blessed with grandchildren Nathan (Candice), Miriam, Esther Chupp, & Melissa (John) Ilkenhons. And triple blessed with great-grandchildren Cruz & Abby. In 2019 they celebrated their 70th anniversary, nine months before Gloria’s passing in November 2019. In 1966, after preaching ministries in the islands of Marinduque and Mindoro, Cruzada Church of Christ in Manila, as well as working with the Philippine Bible Society, Terry and Gloria were called by “Go Ye” Chapel, now Orchard Group, to come to the U.S. as missionaries to the Filipinos in New York City. A few years later, he started Love Mission, located in “ Hell’s Kitchen” in mid-Manhattan, through which he showed the love of God to those in one of the poorer areas of NYC. The mission work gave Terry the opportunity to share his passion for the Word with many churches, Bible colleges, and other Christian organizations all over the U.S. & abroad, where he met people from all walks of life, many of whom became life-long friends. After full-time ministry in NYC, Terry and Gloria retired to the Orlando, Florida area , where he found more time for his favorite pastime – bowling. Never retirees from Christian service, they were active church members, serving as Bible study leaders, volunteer pastors to other seniors, church greeters, teachers. Terry continued to hold Bible studies at his nursing home until health issues caused him to stop just a few months before he was called home. Terry has left this earth, but his passionate witness for the Gospel can be seen in the changed lives of those he touched with the love of Jesus Christ and in his children and their children who are continuing his legacy of faithful service to the Lord

On July 7, 2021, two weeks short of his 94th birthday, Emiterio &#8220;Terry&#8221; Reyes Jr. went to meet the Lord whom he had faithfully served for most of his life. Terry, as he was known by family and friends, was born in Cavite City,... View Obituary & Service Information

The family of Emiterio "Terry" Reyes Jr. created this Life Tributes page to make it easy to share your memories.

Send flowers to the Reyes family.