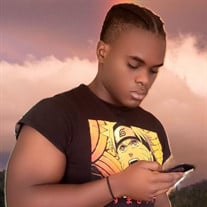 Edward John Levy affectionately known as “EJ” departed his earthly life on Saturday, July 3, 2021, at his residence in Kissimmee, Flordia. EJ was born on October 2, 1999, in Brooklyn, New York to John E. Levy, Sr. and Sherrol Brebnor-Levy. At an early age, EJ attended school in Tobago, and every few months he would travel to New York to be with family. At the age of eight, EJ relocated to Brooklyn, New York, and attended Hanson Place and Crispus Attucks in Brooklyn, New York. He then relocated to Flordia and attended Bellalago Academy, and graduated from Liberty High School in 2017. He later went on to continue his education at Bethune Cookman University, Daytona Beach, Flordia from 2017-2019. EJ received numerous awards while he attended school. During his spare time, he enjoyed fishing, playing video games, and going to the gym to work out. He is survived by his loving parents John E. and Sherrol Levy; three brothers Sedacca Gardiner, Malik and John Edward Levy, Jr., all of Brooklyn, New York; maternal grandmother Edris Brebnor, and a great-great-great grand aunt Roslyn Paul, both of Trinidad Tobago; two nephews and a niece; nine aunts, ten uncles, someone he loved as a sister Chapelle O’Brien; and a host of other cousins, family members, and friends. He was preceded in death by his paternal grandparents David and Maggie B. Levy; maternal grandfather Allan Brebnor, seven uncles, and two aunts.

The family of Edward John Levy created this Life Tributes page to make it easy to share your memories.

Send flowers to the Levy family.