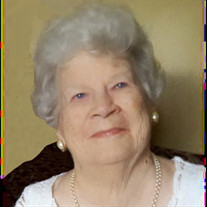 Earleen Danford Shorey She was born on November 2, 1929 to Earl McNeil Danford and Blanche Othelia Braswell and is a native of Bolivia, North Carolina. After marrying John Roberson, her high school sweetheart in 1948, they moved several times throughout the rich timber-lands of the Carolinas and Georgia forests, following his job. This led them to British Honduras in 1960, settling there, only to be forced out by a devastating hurricane a year later. She fled with their five children, staying in Kissimmee where her parents resided at the time. After her divorce with John years later, she met Roger Shorey, to whom she was married for 25 years. She was a highly skilled seamstress and owned her own Fashion Fabrics store in downtown Kissimmee in the 1960’s; she made band uniforms for the Junior High School on Beaumont Avenue, made costumes for several Little Theatre productions when it first opened on Highway 192. She was a retired Computer Analyst from Plant 9 Mercury Marine in St. Cloud, Florida where she worked for 23 years. She was a prolific writer for more than 45 years, beginning with poetry and short stories of her family life on the farm as a child in the 1930’s and 40’s in Bolivia, North Carolina. She compiled and wrote the history of Plant 9 while employed there. As a published author for the last 25 years, her writings were in the Kissimmee Gazette, the Orlando Sentinel newspapers in addition to the “Reminisce” magazine and Wilmington and Southport, NC newspapers and magazines. Among her writings was the history of the rural town in which she grew up, "Bolivia, The First 100 Years," which proved to be a hugely successful venture, selling 2,000 copies. Last year she wrote 21 short stories and just before she went into the hospital on May 3, she was finishing 3 more stories which no one has seen yet. From the age of 13, she began playing the piano for her hometown church in Bolivia, NC and throughout her various moves after her marriage, her first order of business with each Methodist church she joined, she asked to play the piano. She was an active, faithfully-serving member of the First United Methodist Church Kissimmee for over 60 years where she was the Junior Sunday School teacher and pianist for evening services and for her Wesley Fellowship Sunday School class for more than 20 years. Prior to that, she was a member of the Joy Fellowship Class taught by Murray Overstreet. She was one of the first coordinators for Daily Bread, which acquired and prepared food for the area homeless. She was the first Cub Scout Den Mother in Kissimmee for Troop 295, sponsored by the FUMC, this troop is still active today. For the last 11 years, she was very proud to be an active member of the National Society of Daughters of the American Revolution, Joshua Stevens Chapter, St. Cloud, Florida. She was a descendant of two Revolutionary patriots, Elisha Sellers (of her Danford heritage) and Thomas Delbridge (of her Braswell heritage.) She had a keen interest and very deep knowledge of her family ancestry; she loved her family and made every effort to stay in touch with as many as she could. She is preceded in death by her parents, her husbands, her sister Betty D. Lockfeld of California, her daughter, Judith Annette Garibay of Clermont, Florida, and two grandsons Luis Roberson and Justin Roberson. She is survived by her sister, Carolyn Danford Posch and brother-in-law Michael Posch of Los Altos, California; her step-son, Roger Shorey (wife Brenda); four children: John C. Roberson, Jr., of Belize (wife Mariam), Cynthia E. Roberson of Kissimmee, Jeffrey E. Roberson of Belize (wife Yolanda), Mark D. Roberson of Orlando, (wife Mercedes); 12 grandchildren: Lisa M. Busto of Clermont (husband Alex); Kris Dinger of Tampa (wife Tara), Kristin Utsman of Miramar (husband Ryan), John Trey Roberson of Belize (wife Ari), Carrie Roberson of California, April Johnson of Kissimmee (husband Corwin), Jeanah Roberson-Brown of Wyoming (husband Jacob), Jeffrey Roberson of Salinas, California (wife Ruby), Kathrine Plett of Belize (husband Roger); Rommy Baez of St. Cloud (husband Joey), Jessica Lowry of El Paso, Texas (husband Mark) and Nicole Roberson of Cape Canaveral; 24 great-grandchildren and 1 great-great- grandson, numerous nieces, nephews and cousins. Friends will be received at 1:00 pm at the Osceola Memory Gardens Funeral Home, Kissimmee, Florida, followed by the service at 2:00 pm on Saturday, June 5, 2021, Kissimmee, Florida. Interment will be at Rose Hill Cemetery directly after the service.

Earleen Danford Shorey She was born on November 2, 1929 to Earl McNeil Danford and Blanche Othelia Braswell and is a native of Bolivia, North Carolina. After marrying John Roberson, her high school sweetheart in 1948, they moved several times... View Obituary & Service Information

The family of Earleen Danford Shorey created this Life Tributes page to make it easy to share your memories.

Send flowers to the Shorey family.